(Redirected from MAP30: Icon of Sin) 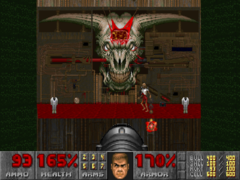 MAP30: Icon of Sin is the thirtieth and final map of Doom II. It was designed by Sandy Petersen and uses the music track "Opening To Hell".

After completing MAP30, the cast of game characters is shown. 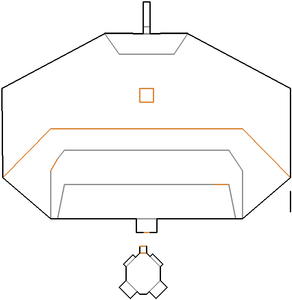 Pick up the weapons and powerups and go through the teleporter. You will arrive at the lowest one on a series of large step-like platforms. The Icon of Sin will make its unholy introductory speech and then immediately begin spawning monsters endlessly. It can spawn any monster in the game, with the exceptions of the bosses (the cyberdemon and the spiderdemon) and the different kinds of former humans, who are not demonic in nature. Each step in the simple construction is an elevator that can be activated by pressing on the demonic face on its side. Be ready to defeat or bypass the first monsters created by the boss and be careful with the incoming cubes as they may telefrag you, independent of whether or not you are invincible by means of the God mode or invulnerable by means of the invulnerability artifact. Get to the top step and use the demonic switch found there. A small platform in the slime pool at the bottom of the steps will rise up.

Before heading up, if you are playing the level using the Ultra-Violence or Nightmare! difficulty, kill the revenant - it may disrupt your rocket attacks. When the pillar-like platform in the slime has stopped rising, press on its side. The square pillar will lower to the floor as an elevator. Stand on the pillar and select the rocket launcher. Turn to face the huge cybernetic face of the boss on the wall over the platform across the series of steps. The platform will rise. Slightly before the elevator reaches the top, launch a rocket towards the demon's exposed brain. If timed correctly, the rocket will enter the opening exposing the brain and an echoing low-pitched pain sound will be heard. It takes practice to time correctly, although one can say that firing as the tip of the rocket launcher reaches the gigantic demon's chin is reliable. Three direct hits are generally necessary to defeat the boss. When defeated, explosions occur in front of its hideous visage and the game exits to the intermission screen.

Advanced techniques to destroy the boss quickly include running down to the rising pillar from the switch atop the huge steps, lowering the pillar from the edge once it has reached the top to fire again and firing while jumping off the pillar, possibly towards the platform below the face to acquire some powerups.

An alternative method to complete the level uses a hitscan attack. The arch-vile's attack can fly you in the air and make you land on the face of the boss. Once there, you need to aim very accurately at a certain angle with a hitscan weapon to inflict damage to the final boss. [1]

Dodging the horde of monsters spawned by the boss is a challenge, and often one must lure a group of monsters away from the platform before jumping on it again or kill them with the BFG or another high-powered weapon. Arch-viles, pain elementals, arachnotrons, and revenants are particularly disruptive as their advanced attack modes can easily hinder or damage the vulnerable player atop the pillar. Pain elementals and arch-viles should be focused on if the player takes on the horde, as the pain elemental's ability to spawn lost souls endlessly and the arch-vile's ability to resurrect slain demons are even more dangerous than usual when combined with the endless stream of demons created by the Icon of Sin.

Two radiation suits are located on the platform directly below the evil visage. They are a convenience against the damaging slime at the foot of the pillar, although lower skill levels (1 and 2) provide four invulnerability powerups around it to ease the task for novices. Monster infighting and some monster telefragging will occur and help to limit how dense the horde becomes.

There is a single inaccessible linedef outside the map on the eastern side. The line is a part of an unclosed sector.

The linedefs that make up the right side (its right) of the Icon of Sin's face are 264 map units long. However, the textures are only 256 pixels wide, which causes all three of them to repeat eight map units across from the center of the face. The most noticeable effect is that the right horn is separated from the Icon's head. The linedefs which represent the left side of the face are 256 map units long and thus do not exhibit the error.

If the level is played on Nightmare! difficulty or with the -respawn parameter set, respawning monsters may telefrag the player if they respawn at the player's exact coordinate at any height of his vertical column.

If the player remains in the level for a long period of time after being detected by the spawn shooter, the level will fill up with monsters. If many monsters populate the level, it can cause a crash due to the nature of the Icon of Sin that endlessly fires its spawn shooter cubes that turn into monsters when reaching any given surface. The possible crash occurs when the number of living monsters exceeds the limitations.

Savegames have specific problems in the level. If the player saves a game after having woken up the final boss, quits the program and then returns to load the savegame, a Venetian blind crash will occur. A detailed explanation can be read here.

The spawn shooter in the level is placed facing directly east. East corresponds to zero angle in Doom coordinates, so the level designer probably forgot to give the spawner's thing proper orientation. It does not hinder the spawner's ability to shoot cubes, as they simply fly straight to their preset target spots. Also, it still wakes up normally as soon as the player teleports into the final area, since the player's teleport destination lies within its 180-degree field of view. However, it will not notice the player if he enters the cavern from the western side of the map using the no clipping cheat.

Originally, Compet-n had a "maximum kills" challenge for the level different from UV max, in which the objective was to get the highest percentage of kills one could. However, in l30-1840.lmp, recorded on July 9, 1996, Kai-Uwe Humpert demonstrated that if you wake up the monster spawner as soon as you teleport into the boss' room, stay on the platform you teleport on and stand near either one of the southernmost corners of the next highest platform all without firing a shot, you will be out of the sight of every one of the monsters created and they will never wake up. From there, you can wait while the monsters telefrag each other to get as many kills as you want, potentially by leaving your computer on overnight, and then finish the level after that. Because of the discovery, the "maximum kills" challenge was discontinued the day of the demo's release.

* The vertex count without the effect of node building is 76.

A par time of 3:00 is defined in the source code (g_game.c), but never actually displayed. Some source ports do generate intermission screens for the original boss levels which include their par times.

The official French name of this level is L'Icône du péché (accents are not reflected in the game itself due to technical limitations).