MAP30: Icon of Sin is the thirtieth and final map of Doom 2 In Name Only. It was designed by Cyriak Harris (mouldy). The map consists of seven linearly-connected areas, each inspired by one of the seven deadly sins. Visiting each area unlocks the central hub where the Icon awaits. The par time defined in MAPINFO is 3:00. 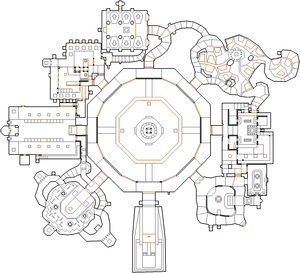 Following a mandatory death exit from the prior level, the player must collect weapons (one available in each area) and ammo (widely available) to deal with the spawned monsters. Performing a certain action in each area (usually collecting the weapon) prevents more monsters from spawning in that area, but completing the area too quickly (or not performing the action at all) will earn the player a bonus arch-vile in the final fight. Each area also hides a secret. It is not necessary to collect all the weapons before accessing the central hub.

Players can begin in any of the seven areas, a useful way to explore each area before too many monsters are spawned.

Starting from the level start (due South) and traveling counter-clockwise, the areas are:

Once the player has visited all seven areas, a red key will appear in each area allowing access to the central hub. Opening the red doors will unleash the accumulation of flying monsters first. Proceeding into the center will remove the barrier blocking the ground monsters. Approaching the icon will raise a spiral stairway; at the top the Icon's weak point is fully vulnerable to any of your weapons.

The crowd-clearing power of the BFG, along with the difficulty of obtaining it when the area is full of monsters make Superbia the logical place to start. From there you can proceed in either direction, but collecting the more powerful weapons first will probably be easiest.

The seven arch-viles (Things 416 through 422) in the northern monster cache have no flags set for any of the three difficulty classes, so they do not actually appear in the level.

* The vertex count without the effect of node building is 3754.