MAP30: In Threes is the thirtieth and final map of Community Chest 2. It was designed by Mike "Cyb" Watson. Its title is derived from the fact that it contains three final bosses, side-by-side. It uses the music track "Dark Siege" by Jared Boice. 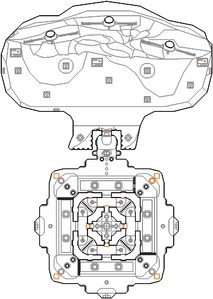 Map of In Threes
Letters in italics refer to marked spots on the map. Sector, thing, and linedef numbers in boldface are secrets which count toward the end-of-level tally.

Do not linger in the blood for too long, as it is damaging.

Kill the chaingunner in front of you and go through the opening. Two imps will ambush you on the sides, so kill them and flip the left switch to lower the faceted wall. Press the right switch to raise it up slightly so you can proceed. There are two chaingunners on the sides of this area, and the yellow skull key is accessible on the left. Grab it and return to the beginning. You will then take the yellow door on the left and repeat the same procedure, only the switch to lower the wall is on the right hand side this time. There are revenants behind this wall, and a berserk pack dead ahead. The red key is to your left. Now take the red door which is south of the starting point. Again, the same procedure applies, this time with a backpack dead ahead and the blue key to the left. You will need to repeat this procedure one more time, this time with a blur artifact across the blood and an invulnerability to the left. Grabbing the invulnerability triggers a door to open, and arch-viles to spawn (Note: since this is MAP30, there is a chance that the arch-viles may accidentally telefrag each other) as well as a pathway across the blood to the north.

When you are truly ready, press the switches for the finale against several monster spawners. Monsters will spawn in the field on the brown squares, and since there will be many of them, you need to be on your toes. Flip the three ground-level switches to raise the stairs up to the three pedestals with keycards on them. Each switch here requires all six keys to activate, so you have to pick up every keycard and then press the three switches. When you press them all, the Icon of Sin's death growl is triggered and the level ends.

* The vertex count without the effect of node building is 3683.