MAP30: It is the thirtieth and final level of Memento Mori II. It was designed by Jim Wraith and uses the music track "Dance of the Sugarplum Lunatic" by Mark Klem, which is an arrangement of "Dance of the Sugar-Plum Fairy" from Tchaikovsky's The Nutcracker.

Well soldier, it doesn't look good.. All we've received from the target is a crackly radio transmission, from which we could only discern the fact that the area is *very* dangerous, and if the conditions weren't such we'd arm you with a H-Bomb. There's not much after this though.. Get past this one and you're home free.. Good luck trooper! 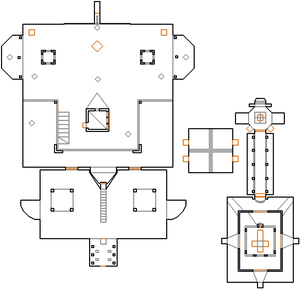 Map of It
Letters in italics refer to marked spots on the map. Sector, thing, and linedef numbers in boldface are secrets which count toward the end-of-level tally.

Teleport (no return), use the skull switch (medium and hard skills: beware of the arch-vile on the back side), open the skull doors, open the door between the torches (a pain elemental waits for you).

When you go in, the side parts will open. This also means that as soon as you make a noise, additional monsters will teleport in, some of them onto the red cross in your back. Open the door at the other end, beware of monsters behind the side walls and use the green teleport stone (no return).

Open the cross-like wall parts, use the lift to reach the switch behind the cyberdemon, this switch will raise the stairs to another switch, which will open the final arena. When you make a noise or enter the corridor, the demon-spitter will start.

Jump down into the arena and use your BFG9000 for the spiderdemon. Pick up the light amplification visor, this will trigger the pillar behind to lower. When it is down, you will find an invulnerability sphere that you have to pick up because it contains the blue key. While you are waiting, lower the two columns on the left and right, which will give you the yellow and red keys. Use the lift to the central building, switch on the three skulls, direct some rockets at the demon-spitter and you are done.