MAP30: Malignata is the thirtieth and final map of TNT: Revilution. It was designed by James Caldwell (Obsidian) and Darryl Steffen (dobu gabu maru), and uses the music track "Trampled uNderneaTh," by Brendan Bradley (Bucket). The par time is 7:00.

This is the only level to use the custom enemies and entities provided by Revilution's DeHackEd lump: the laser and rockets turrets, the Holo-Icon, and fake spawn cubes. 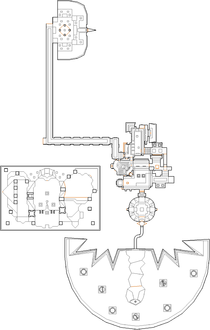 Map of Malignata
Letters in italics refer to marked spots on the map. Sector, thing, and linedef numbers in boldface are secrets which count toward the end-of-level tally.

-Fake spawn cube: a dummy enemy that is telefragged when a randomized monster teleports into its location. This was to give the impression that the monsters were spawned via the cube itself: initial versions attempted to do so legitimately, but caused numerous game-breaking errors.

-Plasma turret: an unkillable stationary enemy that fires streams of plasma at the player. A sound effect plays before it fires to give the player time to dodge.

-Rocket turret: a variant of the plasma turret that fires Cyberdemon rockets.

-Holo-Icon: essentially a cosmetically altered Romero's head: it is functionally identical in all other aspects.

A bloody mess (Thing 801) and a pool of brains (800) halfway the long northward corridor have no flags set for any of the three difficulty classes, so they do not actually appear in the level.

* The vertex count without the effect of node building is 4278.