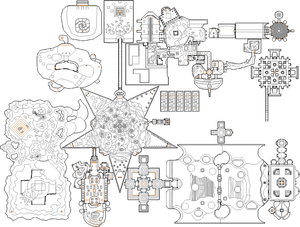 Map of Megiddo
Letters in italics refer to marked spots on the map. Sector, thing, and linedef numbers in boldface are secrets which count toward the end-of-level tally.

In the section filled with map snippets from previous maps (done by dobu gabu maru), if you go to the building beyond Secret #4 (en route to Secret #5), and use the second lift to reach the top of the dilapidated building, it is possible to climb the broken pieces of rooftop and jump directly west through the southwest opening, to the west side of the building. However, there is nothing of note here and it is not possible to get out of this region without using cheats.

* The vertex count without the effect of node building is 21771.