MAP30: Mortis Infinitum is the thirtieth and last map of NDCP. It was designed by BlackFyre and uses the music track " ". 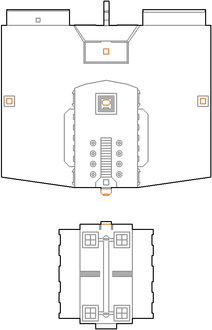 Map of Mortis Infinitum
Letters in italics refer to marked spots on the map. Sector, thing, and linedef numbers in boldface are secrets which count toward the end-of-level tally.

Gather supplies here, before teleporting into the Icon of Sin's lair. There is a cyberdemon in front of the Icon, and two spider masterminds in the blood. What you need to do is drop slightly to your left, here you will find two satyr switches. Press on the one that is already lit. Drop down and use the teleporter to return. Now fall slightly to your right to find a lion switch. Again, press it and return to the top. Directly behind you is a switch to raise the lift on the marble pillar in front of you. Ride it up, and then shoot rockets at the brain to destroy the boss (you may have to get rid of the cyberdemon first, as he could get in the way).