MAP30: Nevermore is the thirtieth and final map of Requiem. It was designed by Adam Windsor, and uses the music track "Under Death" by Mark Klem.

You have uncovered the secret stronghold of the Demons .... Intelligence says you should have the advantage of surprise on your side, but they believe that the Demons will be able to summon many reinforcements quickly, if need be. Your objective is straightforward enough -- find the switch to open the shielding on the Demons' power core and destroy the power source itself, but you must do so quickly enough that demonic reinforcements do not overwhelm you .... 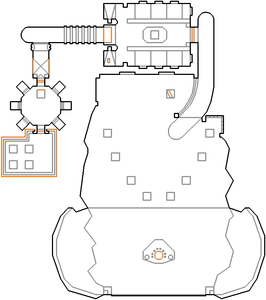 Map of Nevermore
Letters in italics refer to marked spots on the map. Sector numbers in boldface are secrets which count toward the end-of-level tally.

Open the door and grab the super shotgun. You will also reveal several supplies in cubby holes nearby. When you are ready, open the next door, killing monsters in the hall and in the next room. Find the down switch in this room and press it, lowering the rocket launcher but also triggering monsters to teleport into the room. You do not have to take the rocket launcher though, but it may help against the final boss. When you are ready, enter the door to the right, quickly killing the zombies as you make your way to the big room. The final boss will be alerted and will spawn cubes on the eight teleport pads in this room, so keep your distance from them to avoid getting telefragged. An arrow of health bonuses points to where you should shoot, but first, press the switch that is to the right when you exit the walkway leading the big room. This opens up the silver column revealing a red column which you should shoot at. You can shoot at it from any angle with any weapon. A rocket launcher helps here for its splash damage. Damage it enough times to kill it and end the megawad.