MAP30: Nucleus (called Nuclear Core on the TeamTNT website) is the thirtieth and final level of Icarus: Alien Vanguard. It was designed by Ty Halderman, Brian Kidby, and Jim Lowell. It uses the music track "Face of Evil" by Tom Mustaine. 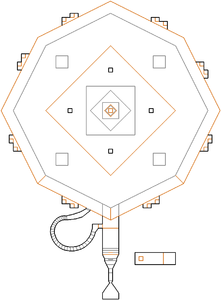 Map of Nucleus
Letters in italics refer to marked spots on the map. Sector, thing, and linedef numbers in boldface are secrets which count toward the end-of-level tally.

Take the teleporter at the beginning and quickly run up the stairs. Take the lift down and then head into the main arena. Run along the outside perimeter of this area and stay on as it is going upwards. Return to the ledge where you came from and you will find a flashing skull switch. Shoot it to reveal a target. This target is under a crusher, so time a good rocket shot through the target to damage the boss brain. All the while, be careful of spawning monsters in and around the area.