MAP30: Onslaught is the thirtieth and final level of PlayStation Final Doom, and the sixth level of the Plutonia episode. It is based on the PC version of MAP10: Onslaught from The Plutonia Experiment, with modifications to accommodate the PlayStation's framerate and memory limitations and add enhancements such as colored lighting. It uses the music track “Breath Of Corruption”.

The author of the original level was Dario Casali. Changes for the PlayStation port were authored by Tim Heydelaar.[1]

After completing this level, the player is presented with an altered version of the ending text from The Plutonia Experiment, followed by the cast of characters. 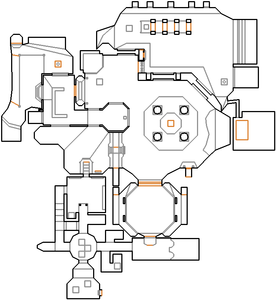 Map of Onslaught
Letters in italics refer to marked spots on the map. Sector, thing, and linedef numbers in boldface are secrets which count toward the end-of-level tally.

When the level starts, kill the chaingunner behind you and take the partial invisibility. There is a fenced area to the north with the blue skull key at the end - as you approach it, alcoves will open around you containing chaingunners. When you take the key, another alcove opens behind you containing cacodemons. You can approach the key slowly and open the alcoves one at a time, or go straight towards the key and cause infighting between the enemies in this area.

Once you have the blue key, go south-west to some blue skull bars and open the door next to them. Flip the switch behind the door to lower the bars. As you pass the bars, a wall will open in front of you to reveal an imp and chaingunners, and another alcove opens behind you with cacodemons. Head south past a structure with four pillars and open the large door in the south wall, revealing a round chamber containing a cyberdemon, overlooked by ledges with chaingunners. Battle the cyberdemon or lure it into the central area, then press the switch it was guarding to descend to a sewer area. Go west to a room with three square lights, then go south into a room with a gray floor. Press the switch on the east wall.

Return to the room with three lights, go west and then north up a staircase. You will reach a tan room with computer textures - go north and up another staircase into an outdoor area. Turn round and press the switch in the south-east corner, then go east under a low ceiling to return to the central area. Go into the four-pillar structure in front of you and take the yellow skull key in the center - a number of enemies will teleport in.

Go north-west and open the door between two tall red firesticks, indicated by yellow skull bars. Go south and east and take the red skull key from a plinth in front of you. Backtrack to the structure where you found the yellow key and look south - you will see a switch flanked by red skull bars. Press the switch to reveal an alcove and press the switch inside it.

Go back through the yellow door, and head west through a door which has opened. Follow the fenced area north and east, watching out for ambushes from imps and chaingunners. At the end, step into the exit teleporter to finish the game.

In the computer room past the sewer area, megaarmor can be seen on top of a platform. When you climb the staircase to the south, a barrier in front of you will temporarily lower; this also lowers the platform with the megaarmor. Go south and collect the item before the platform rises again. (This is counted as a secret on PC.)

The back walls (linedefs 29 and 41) of the ledges in the cyberdemon area are not flagged with "Render Mid-Texture". Because of this, you are not able to see the WOOD12 texture and can see into the unused areas where the arch-viles were in the PC version.

This level is encountered before The Death Domain on PC.