The title given to this article is incorrect due to technical limitations. The correct title is MAP30:

(Kama Sutra).
This level occupies the map slot MAP30. For other maps which occupy this slot, see Category:MAP30.

(the symbol appears in the intermission screen in lieu of a proper map name), also called <|> in the text file, is the thirtieth and final map of Kama Sutra. It was designed by Adolf Vojta and uses a MIDI track from the videogame Lemmings, a rendition of Galop Infernal from the Jacques Offenbach's operetta Orpheus in the Underworld.

It is probably the most infamous map from the megawad, having contributed the bulk of its notoriety, due to the major adult overtones in the final battle where the player confronts a giant, naked female body.

symbol is a representation of the Czech profanity "píča" (the author Adolf Vojta being Czech).

was featured in Doomworld's Top 100 Most Memorable Maps, placing 28th.

Well, I was helding this idea in my mind for maybe a year... I was still worried how could it end up, expected many visplanes HOMs and so on. But the result looked .. very nice and even I was able to complete the whole body without any big HOMs. (yes there are a few ones). It's perhaps the map I am most satisfied with :)

Note: Thanks to my ex-girlfried who gave me some inspiration :) 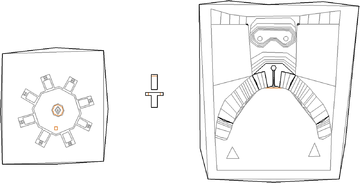 Map of Píča
Letters in italics refer to marked spots on the map. Sector, thing, and linedef numbers in boldface are secrets which count toward the end-of-level tally.

On start, you will be stocked with all weapons. Make your choice between the two teleporters. The "kids" route actually is fairly difficult: here you simply must wait for the central pillar to lower - under the hail of rockets from eight cyberdemons.

Having chosen the "adult" route, go to the central structure and inspect its opening. This will awake the spawn shooters and the barrier protecting the Romero's head will begin to lower. Eight cyberdemons will teleport with you into the area, usually telefragging some of their kin in the process. To damage the final boss, stand close to the opening and fire your rocket launcher into the shaft. When the boss dies, you will be killed too, but it will make no difference anyway.