MAP30: Point Dreadful is the thirtieth and final map of Alien Vendetta. It was designed by Anders Johnsen, with the deathmatch portion designed by Kim André Malde. It was known as Point Dreadfull [sic] in the first release of the megawad. The music for this map is an unnamed track composed for the PC game Lands of Lore 2 that was ultimately not used. The par time defined in the executable is 1:10. 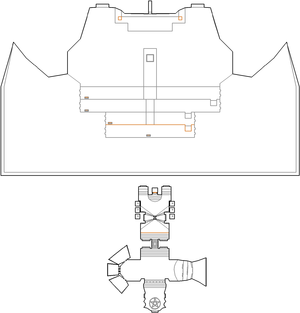 Map of Point Dreadful
Letters in italics refer to marked spots on the map. Sector, thing, and linedef numbers in boldface are secrets which count toward the end-of-level tally.

Go north, grabbing the weapons to the left. When you head into the room with the megasphere, the portal is just ahead. You will meet the Icon of Sin here. Go left and hit the switch to lower an invisible platform (marked by two torches). Quickly run here and ride it up, timing your rocket launcher shots to hit the brain when you do. The Icon will spit out four cubes at a time, on the platforms you are on. If you fail to kill the Icon the first time, you will have to ride the lifts up. However, the first one is next to impossible to reach since the switch is very far away from the lift you need to go on. This is why it is recommended to time it as swiftly as possible, so you do not have to go a second try. 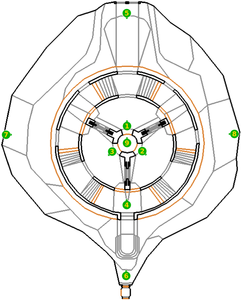 * The vertex count without the effect of node building is 1511.