MAP30: Pray for Hell is the thirtieth and final map of The Twilight Zone. It was designed by Paul Corfiatis and uses the music track originally from MAP06 of TNT: Evilution. The par time defined in MAPINFO is 2:24. 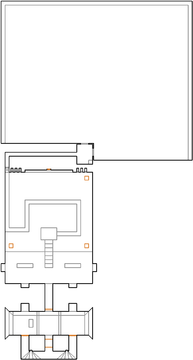 Map of Pray for Hell
Letters in italics refer to marked spots on the map. Sector numbers in boldface are secrets which count toward the end-of-level tally.

You start on a balcony on the SW of the map and on the SE there is a shotgun, chaingun and super shotgun plus plenty of ammo. The main entrance door is guarded by a baron of Hell surrounded by barrels which usually kill the baron. Inside the building is the Icon of Sin and two cacodemons. The Icon spits six cubes at a time and the cubes are spat from the sides of the Icon and it cannot be defeated in the usual way.

Below is a huge pit of lava and a door in the NW part of the map, and a bridge must be raised to gain access to Romero's head. Climb to the top of the staircase and shoot the Icon of Sin with the shotgun or super shotgun. Two switches are revealed, one of them raises a bridge and the other opens the door. Once these actions are complete, the level is easily beaten as you go inside the Icon of Sin to destroy its brain up close, as it is only guarded by a trooper who is the last enemy in the megawad.