MAP30: Ragnarok is the thirtieth and final level of Community Chest 4. It was designed by Josh Sealy (Joshy) and uses the music track "Hell Reigns Down" by Josh Simpson (EarthQuake). 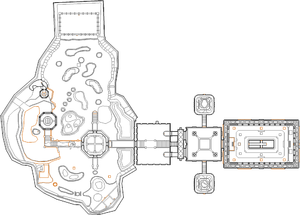 Map of Ragnarok
Letters in italics refer to marked spots on the map. Sector, thing, and linedef numbers in boldface are secrets which count toward the end-of-level tally.

Community Chest 4's final level is the absolute pinnacle of its difficulty - still a challenge even if you have come out fully loaded from MAP29. Amidst all the lava and the massive horde of enemies, you must make full use of Doom's signature gameplay feature - your ability to run at high speed.

The level uses all six keys. The red and blue skull keys need to be collected first, in any order (however, it is a better idea to collect the red skull key first). After that, the remaining four keys will be collected in rapid succession.

You begin in the middle of an octagonal room with windows. Grab the super shotgun and two boxes of shells. Two Hell knights and two demons (one each on Hey, not too rough and below) will attack. On Ultra-Violence and above, there is a revenant behind you to worry about.

Next, head down the steps. An arch-vile lies in wait - kill it, but watch for fire from a nearby cyberdemon. Keep to the left side of the walkway to make it along the broken part, collect a megasphere and continue into a larger chamber. This chamber has a spiderdemon, so rotate around it to pick up the shotgun, chaingun, rocket launcher and plasma gun, along with substantial ammo for each. Once done, quickly exit via the north side into the main lava area, picking up the radiation shielding suit along the way

As soon as you step into the lava, you are confronted by a massive horde, some coming from fake floor traps - up to 35 revenants, 20 barons of Hell, and arachnotron and two arch-viles - all while dodging fire from two cyberdemons. Your first job is to keep the arch-viles distracted using monster infighting - let a stray cyberdemon rocket hit them, and they will start turning their attention on the cyberdemons. Next, head to the north side where there is a BFG9000 and plenty of cells. Unfortunately, it is guarded by ten cacodemons and two pain elementals. Try to smash them with rockets before the pain elementals start filling the air with lost souls. Clear your way to the BFG9000, pick it up and turn the tables on the horde.

In the north, there is a skull panel. Press on it, and the fence in the north will lower, revealing a massive horde of 61 demons led by two (Hey, not too rough and below), four (Hurt me plenty), or eight (Ultra-Violence and above) arch-viles. Just keep firing your BFG9000, focusing on the arch-viles which are likely to lead the pack. Once they are all dead, go to where they came from and flip a second skull panel in the north.

The next section is an agility test. Two metal panels block a rock pillar in the west you have to step on to progress the level. Each mancubus trap area has a "+" shaped button, and each one lowers one of the panels temporarily. You have to press both switches and then hurry to jump across that rock pillar while both panels are still lowered. When you successfully do so, you can reach the western section of the map.

At the western section, two (Hey, not too rough and below), three (Hurt me plenty) or four (Ultra-Violence and above) mancubi will appear from a fake floor trap. Kill them and climb up the steps to a blood-filled area. As you enter, 16 cacodemons and three pain elementals will appear from a fake floor trap in the blood. Mow them down, then press the skull panel in the island in the blood.

A large section of wall will lower, revealing a whopping 65 imps. In the north, another cyberdemon and an arch-vile will attack. You need to direct your first BFG9000 attack at the arch-vile, then quickly back off to use the imps as a meatshield (clear the ones at the back to make a path). The cyberdemon will make quick work of the imps. After that, you can finish the cyberdemon off yourself.

Head into where the cyberdemon came from and climb the steps (watch for the revenant lying in wait). Collect the blue skull key.

Backtrack to where the spiderdemon was. Go east and use the two switches to lower the bars in your way. The next area has four mancubi in blood pools (two on Hey, not too rough and below) - nothing big. Continue east and flip the switch at each of the overlooks int he northeast and southeast.

When both switches are flipped, walls in the east will lower, revealing the real threat in this area - another big horde of 26 (Hey, not too rough and below), 32 (Hurt me plenty) or 48 (Ultra-Violence and above) revenants, supported by two arachnotrons and a cyberdemon. Due to the shape of this area, you can't reliably cause infighting here, so just use your BFG9000 to slaughter every monster in this group.

Continue east to a large room with a checkered floor. Collect the ammo in the middle and all the boxes of rockets to resupply yourself. From here, go through both of the doors in the north and south. Each has an identical encounter: an arch-vile in a corridor (not on Hey, not too rough and below) and a spiderdemon in the room beyond. What you do in each room after killing the monsters is identical too: flip the switch in the back of the room to lower blocking posts, then collect two of the remaining keys in the middle.

When this is done, you have all six keys. Backtrack to the big room with the checkered floor and open the door in the east.

The final encounter area starts out quiet. First, go around the surrounding walkway and flip the switch in the east to lower the block surrounding the Icon and initiate the final battle. Head to the west of the walkway and descend into the courtyard. Defeating the Icon is as usual - ride pillar up, put rocket in hole, repeat. The pillar must be lowered by a switch in the east of the courtyard. However, there is a catch - the Icon is supported by two cyberdemons (one on Hey, not too rough and below), which protect the area near the switch in the east. Try to get the cyberdemons to deal with the constantly-spawning horde for you.

Once you finally put enough rockets into the boss brain, you win. If you have completed every level in Community Chest 4 (including MAP35: Midnight Tek Frenzy), then congratulations - you have beat the megawad!

* The vertex count without the effect of node building is 6841.