MAP30: Resurrection is the thirtieth and final map of Cyberdreams. It was designed by Gonzalo Pérez de la Ossa and Albert Valls (Vrooomer). 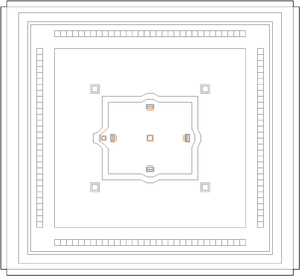 Map of Resurrection
Letters in italics refer to marked spots on the map. Sector numbers in boldface are secrets which count toward the end-of-level tally.

No fewer than 124 cyberdemons will attack you in this map. Although the center of the platform is relatively safe from rocket fire, you will need to go to the edges of the platform to finish the map. To do so, you need to go to the west side, with the "Destruction" sign, and jump across the hurdle here. Quickly head around to the south side and ride the outside lift up, then go to the center and head to the north end, riding that platform up and going to the center again. Finally, head to the east side and up the platform that lowered, then to the center. The cyberdemons will then be immobilized and crushed, and you should then go to the "Destruction" sign where a health bonus will show up. Grabbing it kills Romero's Heads offscreen and finishes the map.