MAP30: Schizophrenia is the thirtieth and final map of 2048 Unleashed. It was designed by James Caldwell (Obsidian) and uses the music track "Getting Too Tense" by Robert Prince. 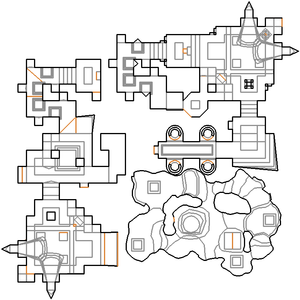 Map of Schizophrenia
Letters in italics refer to marked spots on the map. Sector, thing, and linedef numbers in boldface are secrets which count toward the end-of-level tally.

Step forward to collect a backpack underneath you and lower two platforms with a shotgun and a chaingun, then go straight forward to press a switch which will change the entire room to a hellish theme. Turn left and kill two demons blocking a doorway then step through to a room with a fleshy stream, which is overlooked by a pain elemental and imps as well as a caged arch-vile. Climb the steps next to the arch-vile cage to the top then head forward until you reach a metal lift with a lion face on it, then turn right to see an eye switch on the south wall and shoot it - the lift will lower to reveal a Hell knight. Ride the lift up and follow the passage, killing any chaingunners hiding in the walls, until you reach a satyr switch and press it to return to the techbase.

Step away from the switch and the wall ahead will lower to reveal the starting room. Step past the wall and turn right to see that an alcove containing four revenants has opened behind a translucent wall - enter it to find a super shotgun and a skull switch that will open a nearby doorway (the same doorway you used to leave the starting room in the Hell area). Go to this doorway and kill an arachnotron waiting behind it, climb the steps to reach an armor then turn left to see some chaingunners guarding a switch. Flip the switch and kill a mancubus that teleports in behind you, then return to the starting room to confront a cyberdemon - once it is dead, look in the north-east corner of the room to find two switches and press the right-hand one to return to the Hell area.

Turn round and step forward - four imps and an arch-vile will teleport into the room. Once they are dead, take the rocket launcher, plasma gun and ammo in the north-east corner then press the blue skull switch on the north side of the central pillar, which will make a wall depicting the Icon of Sin lower to reveal a distorted orange sky. You will land on a megasphere in an enclosed area - step forward and the floor will lower, dropping you into a fleshy chamber with a platform in the middle where a giant beating heart will periodically lower and rise. The heart has 12,000 health and can launch a spread of mancubus fireballs at you when injured - you must attack it when it is exposed while dealing with any other monsters that it spawns. Once the heart is destroyed, the level will automatically end.

Because switches can be activated regardless of their height, the switch that reveals the teleporter to the heart chamber can be pressed without raising it first, allowing a significant portion of the level to be skipped.

The imps that teleport into the hellish starting room can telefrag each other if they all teleport at the same time.

* The vertex count without the effect of node building is 1764.