MAP30: Source Control is the thirtieth and final map of Hell Revealed II. It was designed by Jonas Feragen and uses the music track "The Gateway of Hell" by Sam Woodman. 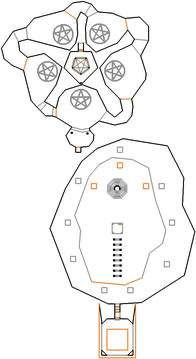 Map of Source Control
Letters in italics refer to marked spots on the map. Sector, thing, and linedef numbers in boldface are secrets which count toward the end-of-level tally.

At the beginning, you are pitted against an arch-vile with no cover (or a revenant on the two easiest skill levels). It is likely that the monster will damage you, so make sure to use the available super shotgun accurately. Once you have killed the arch-vile/revenant, take the berserk pack and follow the path out of the room. There will be a couple of imps. Once you have got past them, you will find a room that resembles the starting point and has another arch-vile/revenant. This time you have cover, so use it to your advantage.

After having gone through five similar arch-vile/revenant chambers, you will arrive at the starting room again. The path that leads you there from the fifth chamber has a line that will trigger an event: when you pass the line, an area with a group of imps becomes uncovered near the starting position. There is a teleporter at the back of the new area.

Once you reach the other end of the teleporter, you will see a door in front of you. Do not open it but look behind instead, where there is a switch for you to press. Now open the door and get rid of the imp in front of you. The center of the room looks like lava, but it is the teleporter to your last fight. Grab all items in the lava room before proceeding further.

You will arrive at a big circular room. In the center, there is a cyberdemon guarding a switch. Near the northern end, there are three arch-viles (on the two highest skill levels) guarding keys on three pillars. Kill the arch-viles and take the items. Once they are in your possession, avoid the spawning monsters and get to the door at the southern end of the room. Open all three doors and press the switch.

Now you have two options: either take the staircase and kill the cyberdemon with your weapons, or shoot the wall to the left of the switch with a hitscan attack and wait about ten seconds for a teleporter to become accessible. The risk in the latter choice is that the spawned monsters or the cyberdemon are able to shoot you from the circular room while you wait. If you survive, you can use the teleporter to telefrag the cyberdemon.

Your aim is to get onto the platform where the cyberdemon was standing. Once you are there, press the switch, select the rocket launcher and shoot the revealed "core" about three times to finish the level.