MAP30: The End is the thirtieth and final map of Ancient Aliens. It was designed by Paul DeBruyne (skillsaw) and uses the music track "Yuletide," composed by Stuart Rynn (stewboy). The par time is 1:00. 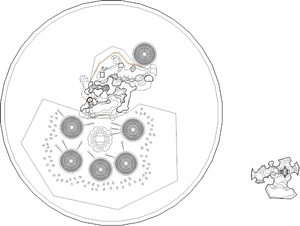 Map of The End
Letters in italics refer to marked spots on the map. Sector, thing, and linedef numbers in boldface are secrets which count toward the end-of-level tally.

There are no enemies to fight on this level. Move to the east and admire the thank you message. You can also pick up the health bonuses that look like drinks on the bar if you want. Move through the waterfall on the end, and follow the path around and past the pyramid under construction. When you reach the top of the stairs, enter the teleporter into another spirit corridor. Listen to the message, and at the end you'll be teleported back to the room with the pipe in MAP01. Attempt to leave the room for a surprise, and the level will end.

As this level does not contain any monsters or proper secrets, all categories except UV speed are redundant.

* The vertex count without the effect of node building is 9417.