MAP30: The Gatewatcher is the thirtieth and final map of Plutonia 2. It was designed by Thomas van der Velden, and uses the music track "Cataclysmic Impact" by James Paddock. The par time defined in MAPINFO is 3:00. 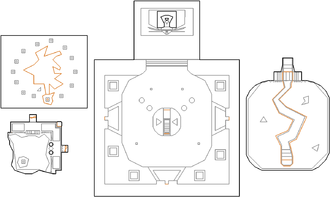 Map of The Gatewatcher
Letters in italics refer to marked spots on the map. Sector, thing, and linedef numbers in boldface are secrets which count toward the end-of-level tally.

Head into the teleporter on the left, and grab all the goodies available. Be careful not to fall off, as it leads to a telefrag via a voodoo doll.

The final boss will rise from the black pit in front of you. First of all, kill all the demons that rise up. Then kill the three cyberdemons that guard the switches, and press all three of them.

Head up to the pillar with the megasphere, and two revenants will teleport in. Kill them.

Now to tackle the final boss-pull out your rocket launcher, and aim at the eye. It does not matter which pillar you stand on-you can attack the boss regardless from either position. It is difficult to hit since the gap is so small-if you fail, don't worry-just reload your game and try again. If there are too many enemies distracting you, clear them out with your BFG if you still have ammunition for the weapon.

Eventually, the boss will explode once you strike him enough with rockets in the right spot. Congratulations on beating Plutonia 2!