MAP30: The Gateway of Hell (The Plutonia Experiment)

MAP30: The Gateway to Hell is the thirtieth and final map of The Plutonia Experiment. It was designed by Milo Casali and uses the music track "The End of DOOM", the music from Doom's text screens.

The Gateway of Hell is one of the three official Doom IWAD levels where the Icon of Sin appears. In the Plutonia Experiment, the monster is known as the Gatekeeper and is protected by a cyberdemon.

A separate deathmatch area exists outside the main map. 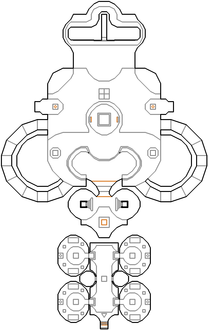 Map of The Gateway of Hell
Letters in italics refer to marked spots on the map. Sector, thing, and linedef numbers in boldface are secrets which count toward the end-of-level tally.

Pick up all the goodies in the starting room and jump down the bloodfall. The bloody floor is not damaging, so feel free to walk on it. Pick up the BFG9000 on a platform in the middle of the room. Go towards the opening in the wall.

You will be teleported to an area with pillars and arch-viles in them. Go straight forward and the wall in front of you will lower revealing some lost souls. The Gatekeeper is covered and protected by a cyberdemon, which you need to kill.

Drop into the circular pit in front of the cyberdemon. Use the switch on the right. Then use the switch to the left which will lower the pillar in the middle of the circle. Wait until the pillar is nearly at the top and fire a rocket into the brain of the now unguarded Gatekeeper. Fire at least three rockets at the brain, just like in Doom II. The monsters around you may be ignored for the most part.

If any of the spawn shooter cubes spawn a monster at the player's coordinates, the player will be killed by means of a telefrag. This will happen even if the player is invincible by means of cheats or powerups.

The two first cases apply to the Icon of Sin and are thus true in any level that has one. 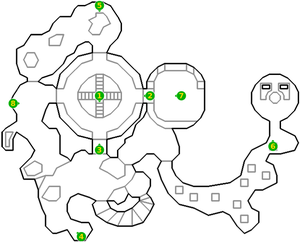 * The vertex count without the effect of node building is 1361.