MAP30: The Image of Evil is the seventh map in the Cabal series. It was designed by Sverre André Kvernmo (Cranium). 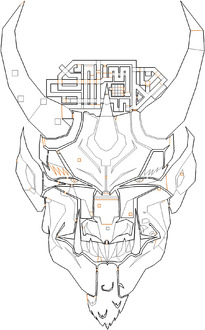 Map of The Image of Evil
Letters in italics refer to marked spots on the map. Sector numbers in boldface are secrets which count toward the end-of-level tally.

Behind the yellow door is a room with two teleporters, both of which lead the room north of secret #2 (see above). One of them leads to a landing pad in the south of this room, the other to a platform with a megasphere a bit further north. North of the landing pad is a trigger line (linedef 1400) which repeatedly raises the megasphere platform by small amounts. If the platform is raised enough times and the teleporter to it then entered, you will become trapped as there is no way to lower the platform (the sides have Action 123: SR Lift Lower Wait Raise (fast) but they are not tagged to any sectors).

* The vertex count without the effect of node building is 1180.