MAP30: Threshold of Pain is a map exclusive to the Sony PlayStation and Sega Saturn versions of Doom. It is the thirtieth and final map in the Ultimate Doom portion of the game, ending with an arena battle against a large group of Hell knights and pain elementals.

After completing this level, the player is presented with a text screen which is actually a cut-down version of the text shown after completing MAP11: Circle of Death from Doom II. They are also given a password that allows them to start the next level, MAP31: Entryway, with their inventory intact. 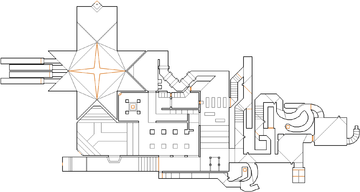 Map of Threshold of Pain
Letters in italics refer to marked spots on the map. Sector, thing, and linedef numbers in boldface are secrets which count toward the end-of-level tally.

Head down the staircase in front of you and go straight ahead through the door. Turn left and head forward across the room, then head straight forward down the hallway and turn right at the end. Climb up a staircase and keep going forward - an alcove will open behind you containing pain elementals. When you reach a dead end with a berserk pack, turn round and you will see another staircase on the right. Climb this and you will see a wall open in front of you - head through here to an outdoor area and drop to the ground. When you land, turn right and you will see a narrow gap in the wall ahead - go through here and follow the path until you see the red skull key in front of you under a low ceiling, guarded by Hell knights.

After getting the red key, return to the previous outdoor area and climb the steps. At the top, look left to see a hole you can drop down to return to an earlier hallway. From here, head back up the staircases to the area where you can get outside. This time run straight forward across the platforms until you land on a partial invisibility powerup, then open the wall in front of you to find a room with a red door. Go through that door and head straight ahead until you drop off the ledge. Turn left and head forward until you see an outdoor area with blood pools on your right. Follow the rock path and take its left-hand fork, then climb the steps and press the switch at the top. This will open a section of wall in the blood pool on your left; go through it and grab the soulsphere on the other side before dropping to the ground.

Turn left and climb the staircase to find twelve boxes of rockets. When you reach the top you will see some knights being revealed through the windows on your left; a wall at the opposite end of the hall will also open revealing more knights. Head back down the hallway and dispatch the knights, then climb the steps they were guarding and press the switch at the top. Return to the other end of the hall and you will see that a wall has opened on the right; go through it and take the blue skull key before dropping off the ledge.

After jumping off the ledge, follow the hallway back to an earlier part of the level. From here, retrace your steps to the red door and go through it, then go straight forward off the ledge. Keep going forward until you see some blue skull bars and open them, then press the switch they were concealing. The marble walls behind you will open, revealing a teleporter which you can step into. Note that you cannot backtrack after using the teleporter, so ensure you have everything you want before moving on.

You will arrive in a large eight-pointed arena, where several pain elementals will teleport in (eight on Ultra Violence skill level, or four on lower skill levels). Head straight forward and the marble walls in front of you will lower to reveal knights. Defeat all the enemies here, then press either of the switches that the knights were guarding to finish the Ultimate Doom episode.

As the level starts, turn round to find an armor pickup in front of the "entrance door".

After passing through the second room, you will have a choice of going straight forward or entering a hallway on the right. Taking the latter path can lead to several useful items, as well as being required to find secret #1.

As you climb the staircases near the center of the level, you will see a berserk pack straight ahead. As you approach it, an alcove will open behind you containing pain elementals; an armor pickup can be found behind them.

After crossing the platforms to the room with the red door, you will also see a staircase leading upwards away from the door. Follow it and open the metal wall at the top to reach a balcony holding a backpack and a plasma gun, among other items.

In the outdoor area with the large blood pools, the right-hand fork in the path leads to a set of steps with a rocket launcher at the top, as well as several rockets.

After getting the blue key and dropping off the ledge, follow the hallway until you see a small alcove on the right holding another berserk pack.

During the final battle, lost souls can easily be spawned outside the boundaries of the level. Should this happen, and if the souls move far enough outside the boundaries of the map, the level will become corrupted in memory; if the game does not immediately crash, it will become gradually distorted, with linedefs moving out of their normal positions and properties of sectors changing unpredictably. While this bug can happen on any PlayStation Doom map containing pain elementals, it is particularly prone to happen here due to the number of elementals present. Care should be taken to try to contain the elementals in the center of the room to avoid this.