MAP30: Unforgiven is the thirtieth and final map of Doom 2 Unleashed. It was designed by Michael Jan Krizik (valkiriforce) and uses the music track "Demons on the Prey" by Robert Prince.

When using the music WAD included with this megawad, this level instead uses the music track "Unforgiven Remix" by Paul Corfiatis. 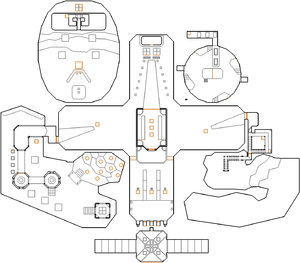 Map of Unforgiven
Letters in italics refer to marked spots on the map. Sector, thing, and linedef numbers in boldface are secrets which count toward the end-of-level tally.

Take all the weapons and ammo in front of you as well as a megasphere, then step into the alcove in the north wall. You will arrive on a ledge facing a cyberdemon across a blood pit - there will also be chaingunners on either side of you on Ultra-Violence (UV) and Nightmare (NM) skill levels. You will see three teleporters in front of you with red, yellow and blue skull markers - you must step into all three teleporters to collect the three skull keys needed to cross the pit.

Step into the east teleporter (with the blue marker) and follow the path past some arachnotrons, imps and chaingunners until you drop into a dark cavern with a fenced staircase that (depending on skill level) contains mancubi, cacodemons and an arch-vile. Go up the staircase past two chaingunners and open the door at the top, leading to a square room with a cage containing imps or cacodemons. Go up either staircase and kill the imps at the top, then shoot the switch in the north-east corner to open a door on your left. Go through the door and kill the zombies waiting behind it (plus a Hell knight on UV and NM), then open the large door on the left and follow the ledge to the blue skull key. Step off the end of the ledge to land on a teleporter leading back to the hub.

Step into the middle teleporter (with the yellow marker) to enter a circular arena - there are two chaingunners and two shotgun guys on wooden steps (or four chaingunners on Hurt Me Plenty (HMP) skill level or higher), as well as two mancubi to your left and right. Kill all the visible enemies then take the yellow skull key in the middle of the arena, which will open two overhead closets containing cacodemons and/or pain elementals depending on skill level. Now climb up all four sets of wooden steps and press the skull switch at the top of each set, which will raise a steep staircase and the platform that held the yellow key. Climb up the steep stairs and kill two shotgun guys waiting at the top (or revenants on HMP or higher), then head north across the platforms into a passage with three crushing ceilings. Step past the crushers and enter the teleporter behind them to return to the hub.

Step into the west teleporter (with the red marker) to enter a marble structure, then head forward to get outside and confront two mancubi. Kill them, along with any approaching cacodemons on HMP or higher, then look west to see a staircase next to three marble pillars and climb it to enter another structure with a knight. Head west and north along two bridges to reach the final marble structure, watching out for shotgun guys and/or chaingunners that appear on four pillars on your left, then follow the structure past some zombies and other monsters until you reach a wooden door. Go through it to find the red skull key, then run off the end of the ledge to land on a teleporter leading back to the hub.

With all three keys, open the three skull pillars in the south wall and press the switches behind them guarded by lost souls which will raise a bridge leading to the cyberdemon's ledge (if the bridge sections stop at the wrong height, press the switches again). Cross the bridge and kill the cyberdemon if you have not already done so, run across to its ledge and take the BFG9000 here then open the wood-panel door. You will enter a room with five bookcases - press the skull switches to lower the bookcases and collect a berserk pack, supercharge, megaarmor and many boxes of rockets then head due north until you see a computer skull switch between two spine walls. Shoot this switch to raise the walls then step into either of the marble plinths behind them.

You will be teleported to an arena with an Icon of Sin, facing a cyberdemon standing on a metal step in front of two skull switches - the Icon will spawn more monsters on four platforms that are raising and lowering at regular intervals. Kill the cyberdemon as quickly as possible then press the left-hand switch eight times to raise the metal step until it is at the same height as the Icon's exposed brain. Press use on any side of the step to lower it, then ride the platform up and fire rockets into the Icon's brain to kill it and finish the game.

In the red key area, there is a pool of water to the north-east with marble pillars. Press use on the pillars to lower them and collect several useful items.

* The vertex count without the effect of node building is 1909.

The red key area bears some resemblance to the south section of Ultimate Doom's E4M8: Unto the Cruel.