MAP30: Viper is the thirtieth and final level of Memento Mori. It was designed by Milo Casali and uses the music track "Terror" by Mark Klem.

The level features an unusual setup for a final boss battle that makes use of the Cyberdemon. 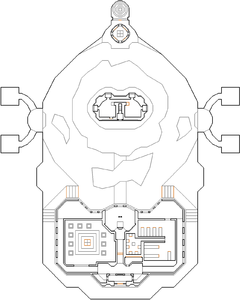 Map of Viper
Letters in italics refer to marked spots on the map. Sector, thing, and linedef numbers in boldface are secrets which count toward the end-of-level tally.

You start in a small refuge. Turn around and you will see a very large arena with a tall building containing many imps in the center, and on each side two arch-viles and a spiderdemon. The skull switch you looked at in the beginning opens an area with all weapons (you will need the rocket launcher later!) and ammo, but also caves with cacodemons behind the arch-viles. As long as you stay on the starting plateau, you are out of the spiderdemons' and arch-viles' reach, while you can attack every one of them, although you have to stand right at the front to catch the imps, and the cacodemons may take their time to leave the caves.

When you are ready, jump down and run to the building at the opposite side of the arena, walk up the stairs and enter at the back, take the hallway to the right to reach the front of building, go into the library, and take the blue keycard and maybe some ammo.
Return to the back of the building, walk into the left room, use the green teleport stone in the center, you are now in the imp building. Walk around the wall, use the gargoyle switch to open the demon-spitter, then use the same teleport you came in through.

Leave the room and enter the blue door next to you, stand on the lift and each time you reach the top position, fire at the demon-spitter's hole. First, you will have to eliminate the cyberdemon, then use some rockets to finish the game. You have to stand exactly centered on the lift or you will hit the borders of the hole in front of you. You may have to leave the lift to avoid the cyberdemon's rockets.

Unlike other levels in the megawad, skill levels are not implemented in this level at all. The gameplay is the same across all difficulty settings.