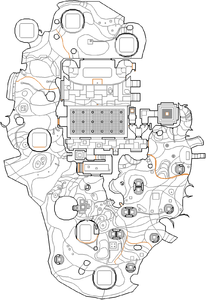 Map of 1010011010
Letters in italics refer to marked spots on the map. Sector, thing, and linedef numbers in boldface are secrets which count toward the end-of-level tally.

All along the level there are seven Keens. In order of accessibility:

Killing them all opens the bars to the super secret level, The Pyramid of Death.

* The vertex count without the effect of node building is 5408.