MAP31: Among the Stars (in Vanilla ports, named "Among the STR" on the automap, which is presumably a typo) is the first secret map of 1000 Line Community Project. It was designed by Aquila Chrysaetos and uses the music track "Tranquil Land" by Tristan Clark. 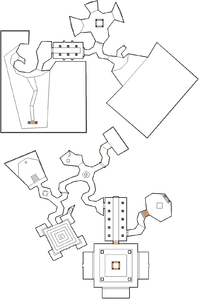 Map of Among the Stars
Letters in italics refer to marked spots on the map. Sector, thing, and linedef numbers in boldface are secrets which count toward the end-of-level tally.

Step forward to get out of the dark and shoot the lion switch in front of you to lower the barrier, then step past it and turn right at the T-junction to enter a hall with a rocket launcher and some imps. Go through the west archway then head south to a narrow path leading to a fire portal - do not fall into the black pit here as it is inescapable, and watch out for cacodemons waiting inside the pit to ambush you. After walking through the portal, go forward to a crossroads with several firesticks and take the south path (between two green firesticks) to reach another hall with several imps, then head south through a doorway (which will close behind you) to find a megasphere in a large square arena. There is a spiderdemon waiting behind the central column, and three chambers will open as you enter the arena releasing mancubi, arachnotrons, revenants and other monsters. After surviving the battle, press the satyr switch in the east chamber to open the central column then step into any of the fire portals inside the column to move on to MAP16: Virulent Well.

When you reach the first T-junction from the start, turn left to see a few imps ahead. Just before reaching the imps, turn left again to find a super shotgun and shotgun shells in front of a red wall; there is a tiny button on the south-east side of this wall that will lower a set of bars blocking the secret exit.

After reaching the crossroads in the south area of the level, there are two paths going east and west that lead to three keys - you will need all of them to reach the secret exit.

With all three keys, go to the hall before the spiderdemon's arena and pass through the broken section of wall in the south-east corner then follow the tunnel to three sets of colored bars that you can open. Behind the bars are an armor, a supercharge and several boxes of rockets, but when you approach the room a cyberdemon will appear in the middle of the room. Fight it off while you wait for the bars in front of the portal to lower; once the portal opens, step into it to be sent to MAP32: Rocket for my Valentine.

* The vertex count without the effect of node building is 865.