MAP31: Archville Madness is the thirty-first map of Congestion 1024. It was designed by Kimmo Kumpulainen (Jimi) and uses the music track " ". 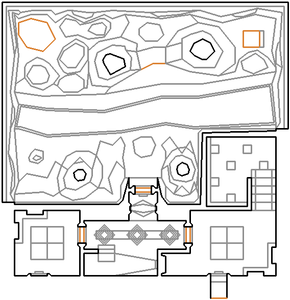 Map of Archville Madness
Letters in italics refer to marked spots on the map. Sector, thing, and linedef numbers in boldface are secrets which count toward the end-of-level tally.

At the start, open the door to your right, then move past the blue door to your left and open the door in front. Ignore the door to your right, climb the stairs to the left and turn left to find the blue key. Backtrack to the blue door and open it. Jump over the lava river and go right. Step into the fake teleporter to raise a switch, then flip it. Go around the rocky structure behind you, cross the space between the two rocky structures, go left and drop into the pit to exit the level. Alternatively, after pressing the switch by the fake teleporter, return to the door seen earlier to find it open. Beyond it is the switch to the super secret level.