MAP31: Birds of a Feather (Sunlust)

MAP31: Birds of a Feather is the first secret map of Sunlust. It was designed by Zachary Stephens (Ribbiks), and uses the music track "Garden" composed by Stuart Rynn.

This level is accessed from Strength and Anger. The only exit leads to the second secret level, Postcoitus Doom. 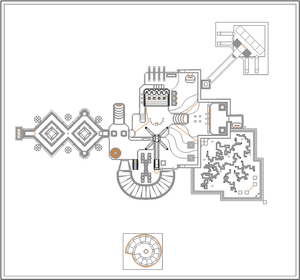 Map of Birds of a Feather
Letters in italics refer to marked spots on the map. Sector numbers in boldface are secrets which count toward the end-of-level tally.

From the starting position, walk forward and drop down to the wooden floor. Head to the right (south), and ascend the steps that curve up and to your left (east). Halfway around the stairs, turn left (north). You will see numerous platforms and water at the bottom. Ascend the platforms to the two keycards, Yellow and Red. Collect both keys.

With both keys collected, you need to visit two places, each with a pair of yellow and red switches. Pressing all four switches exposes the path to the exit. You can do them in any order, but before your path forks, you have to fight your way through the lowest area of the map.

Having collected the keys, turn around and head back down to the curving staircase. Continue east on the staircase. Kill the mancubi on the two platforms, then step down, and continue through the watery area. Alternatively, from the key platforms, jump north and back down to the wooden floor, then head northwest, and use the blue portal.

Either way takes you to a low area, on a dark grey stone surface. Three lion-head switches can be seen, each in front of a tall wooden box. Each switch has several effects when pressed: It lowers a metal barrier on the stairs to the west; it lowers one of the square metal posts to the water, granting a useful item; and it opens the adjacent box, releasing the dangerous monsters inside. Additional monsters may also warp in to the south.

Once you've hit the switches and dealt with the aftermath, proceed northwest past the blue portal, up the flight of wooden stairs (formerly blocked by metal barriers), and then back around and up to the central platform. Collecting the plasma gun here will cause monsters to teleport in to the alcoves to the north.

Now your path forks, to east and west. You can do them in either order.

From the central platform, turn east, and ascend the stairs. You may want to kill the monsters on the platforms on the far side before crossing. You need to make a running jump toward the far side. On HMP and lower, four columns will help you across. On UV and higher, you're on your own. Once across, the two monster platforms will lower, and more monsters may teleport in.

On the far side, flip the lion switch on the railing (to the west) to lower the metal barrier to the east. Continue around and through another blue portal, up to the weird watery area in the southeast of the map. The switches are in the far southeast corner, with monsters on raised platforms. Unlike the west side, these monsters will stay put as you approach. Once you reach the switches, a crowd of imps will teleport in, along with a Hell-knight.

After tripping the switches, take the short stairs at the northwest. Before dropping down, be sure to walk along the ledges to the left and right, jumping the gap for the right. At the end of each ledge, you can collect health bonuses, but more importantly, you'll lower some short posts, which together raise the path to the exit.

Return to the central platform when done.

On the central platform, face north. You should see four switches -- each red or yellow switch will have revealed one. Press all four, and structures will rise out of the platform. In the center is a switch. Press that switch to lower a lift to the south. Ride the lift up, walk across the invisible bridge, and take the teleporter. Walk across the sky (yup), straight ahead, and you will end the level.

Note that if one attempts to use the lift to the exit without having first raised the invisible bridge, one will fall down into a trench of damaging sludge, trapped until you die.

From the start position, you can turn around and head west, to collect goodies and/or fight monsters, before proceeding with the rest of the map. Notably, there is a chaingun, and on easier skills, a supercharge. The red/yellow switches cannot be used without the keys, of course.

After stepping forward after the starting platform, to the east one can find green armor on easier skill levels, or the shotgun on the hardest. On all skill levels, a supercharge can be found at the southwest of this area.

There is one official secret. To obtain access, you need to gather all three armor bonuses found on the level:

After you have collected all three, head to the area with two raised platforms that had mancubi on them. Find a new switch on the metal column in the northwest corner. Press it and you will be teleported to a spiral staircase. Walk up the stairs until you come to a dark place with a column at the center. (Use the automap if needed.) Press this column, and it will lower to reveal a BFG9000. (sector 275)

One does not actually need the keys or the red/yellow switches to exit the map. As with all Doom switches, the switch linedef that lowers the lift to the exit is always active. From the correct spot on the central platform, one can press it before it is raised.

To reach the central platform, one must still traverse the lowest area. To raise the invisible bridge to the exit teleporter, one must still fight through the southwest area and walk the ledges to trip the posts. The western area and the platforms with the keys can be bypassed entirely.

* The vertex count without the effect of node building is 10519.