MAP31: Castle Dorkenstein is the secret map of 1 Monster, and can be accessed through MAP15: Spook House. Completing this level takes the player to MAP16: Mancublood. It was designed by Ronald Lubbelinkhof (Dutch Devil) with edits by Robert Eckhardt (Ichor).

Like all maps in the megawad, the map features only one type of monster, in this case the Wolfenstein SS. It is set in a Nazi base, with a flat, square structure similar to the original MAP31: Wolfenstein, but with more elaborate detailing and decor. 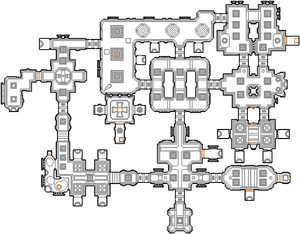 Map of Castle Dorkenstein
Letters in italics refer to marked spots on the map. Sector, thing, and linedef numbers in boldface are secrets which count toward the end-of-level tally.

Enter the next room, then head through the northern door, pick up the shotgun and go through the eastern door. In this room there are two switches on the wall. Press the one with a green light next to it to open the doors. Inside, pick up the chaingun and get the yellow key, but first press the switch with a red light to close the doors and protect yourself from a teleporting wave of enemies. Once you are ready, open the doors and head back to the map's second room, where there is a yellow key door to the east. Behind the door is a corridor with an elevator at the end; inside is the exit switch.

While completing the level only requires visiting five rooms, there are four more rooms accessible through other doors, to the north and west of the level. Ammo, armor bonuses and health can be found there.

If the player never fires a shot in the second room (or in any room connected to it by an open door), none of the teleport ambushes in the map will be triggered, as the Nazis lying in wait will not be woken up.

* The vertex count without the effect of node building is 7216.

The first version of the map contained no weapons outside of secret areas.