MAP31: Command + Control is the first secret map of Cleimos 2. It was designed by Rand and Steven Phares.

It is a re-working of E2M9 of Cleimos. 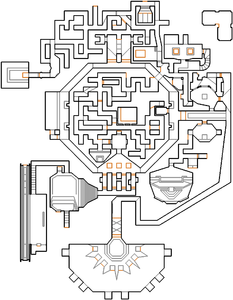 Map of Command + Control
Letters in italics refer to marked spots on the map. Sector numbers in boldface are secrets which count toward the end-of-level tally.

Secret exit: At the north of the maze just before the exit is a switch which opens a door near the door to this maze, which leads to a teleporter to the switch to MAP32.

* The vertex count without the effect of node building is 1374.