MAP31: Crimson Complex is the first secret map of 1000 Lines 2 - Community Project. It was designed by Joshua O'Sullivan (Dragonfly) and uses the music track "Rotted Roots" by James Paddock (Jimmy). 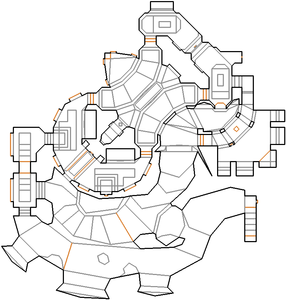 Map of Crimson Complex
Letters in italics refer to marked spots on the map. Sector, thing, and linedef numbers in boldface are secrets which count toward the end-of-level tally.

Take the chaingun then drop down the hole in front of you to find a super shotgun and a megasphere, which you can use to kill the shotgun guys and demons in your immediate vicinity, followed by (depending on skill level) the Hell knights, revenants, mancubus and barons of Hell to the north-east who are guarding a rocket launcher. There are four doors leading out of this room - open the north-facing door and kill one or two spectres waiting behind it, then go through and turn right to see one or two mancubi guarding a switch. Flip the switch to lower the door behind it as well as another door just ahead, then quickly head through both doors before they shut and turn right to drop into a tunnel with one or two knights.

Open the door at the end of the passage to reach an outdoor area with imps, then head south into a dark tunnel and follow it until you see a wall on your right lower to reveal cacodemons; fight your way past them while watching out for spectres that have been released behind you. Get to the top of the steps and collect a supercharge here, then walk north-east on to a red ledge with chaingunners and take the plasma gun here before flipping the switch on the far wall to descend to the floor below. Step north-east, which will cause one or two arachnotrons to rise from the alcove on your right, then open the door at the end of the passage to return to the starting area - some walls have lowered here to reveal several imps and revenants, along with an arch-vile on Ultra-Violence (UV) and Nightmare (NM).

After clearing the area, enter the north closet to find a teleporter and step into it to reach a new area; you will see a supercharge in front of you, but arm yourself before collecting it as revenants will be released behind you, along with imps, demons and barons on Hurt Me Plenty (HMP) or higher. Flip the switch on the column in the south-west corner to raise a pillar that you can use to step over the nearby gap, then walk through the opening in the north wall to land on the yellow keycard. From here, drop to the floor - which will cause various enemies to teleport into the area - then go through the west door to return to the starting area before passing through the south-facing door to return to an earlier chamber. Press the yellow button at the bottom of the striped steps to open a door to the north-west, which is concealing demons as well as two barons and/or arch-viles.

Go through the door you just opened and head down and up the steps here to confront two knights and a baron, then drop into a rocky tunnel and proceed east to a rock with a lamp on it - ahead is a supercharge, but you will have to deal with approaching revenants and knights to get it (plus an arch-vile and two pain elementals on UV and NM), as well as some imps that teleport in around you. Continue east to the end of the tunnel to confront some barons, as well as a cyberdemon on HMP and two arachnotrons on UV and NM. Step into the alcove in the east wall and flip the switch here to lower the floor, then turn right and kill a chaingunner and two zombiemen (on HMP or higher) before going down the steps to move on to MAP32: Ephemeral.