MAP31: Cyberdemon Vertigo is the first secret level of Plutonia: Revisited Community Project. It was designed by Whoo, and uses the music track "Getting Too Tense," composed by Robert Prince for Doom II. The par time defined in MAPINFO is 2:00. 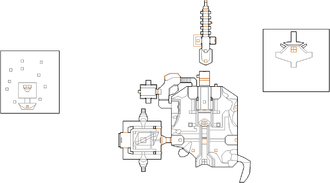 Map of Cyberdemon Vertigo
Letters in italics refer to marked spots on the map. Sector, thing, and linedef numbers in boldface are secrets which count toward the end-of-level tally.

* The vertex count without the effect of node building is 2177.

This level was inspired by Cyberden, the secret level of The Plutonia Experiment. It was built Doom Builder 2 in over thirty hours.