MAP31: Cyberden is the first secret map of The Plutonia Experiment. It can be reached via MAP15: The Twilight. It was designed by Dario Casali and uses the music track "Sign Of Evil" from Doom. The map is named for the four cyberdemons it contains. They start in visible but inaccessible cages where they cannot be hurt by or attack the player; throughout the map they will be released. The pre-level text for this level states: You've found the second-hardest level we got. Hope you have a saved game a level or two previous. If not, be prepared to die aplenty. For master Marines only. 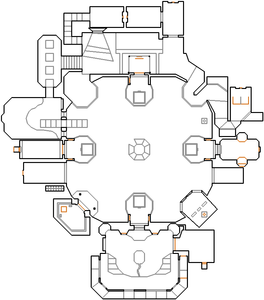 Map of Cyberden
Letters in italics refer to marked spots on the map. Sector, thing, and linedef numbers in boldface are secrets which count toward the end-of-level tally.

Four switches located inside pentagram walls around the map must be pressed to release the cyberdemons from their cages. Each cage has a button behind it and when all four are toggled, the yellow key in the center of the map becomes accessible and allows the player to exit. There is only one functioning exit in this level, which leads to the second secret map, MAP32: Go 2 It. There is no normal exit that leads to MAP16: The Omen, so if you have chosen to play this map then it will be mandatory to complete the second secret level as well.

You start in the middle of a large arena containing the caged cyberdemons; do not worry as they cannot see or hurt you yet. Head straight forward to a sunken staircase in the north-west corner and follow it to an area with a super shotgun, then turn right to enter a room with a chainsaw. Head up the steps on your right then continue east through the next room until you reach a curving tan passageway which has three U-turns - note the north wall at the second U-turn and the south wall at the third U-turn as they conceal monster traps.

As you go round the third U-turn you will encounter two chaingunners or arch-viles that will almost immediately teleport to the monster traps you passed earlier. Quickly take the rocket launcher behind the enemies, turn round and fire into the unseen alcove behind you until you hear the first monster die, then go round to the second U-turn and fire through the north wall to kill the second enemy.

Return to the room at the end of the corridor and press the button inside the pentagram wall - this will release the first cyberdemon from its cage, as well as opening a niche behind you containing a megaarmor and ammo. Backtrack to the arena, pushing past some Hell knights that have been released on the way, and slay the first cyberdemon then enter the north cage and press the button inside it to open the nearby door. Go inside and press a lion switch to move on to the next part of the level.

Go back through the sunken staircase and up to the large room above the north cage - a door has opened in the north-east corner, revealing a second pentagram button and three spectres. Press the button then go back to the arena to defeat the second cyberdemon, which has been released from the east cage. Go inside this cage and press both buttons to open the door between them, then step through to a marble chamber and press the skull switch on the back wall; the floor will lower and reveal two knights, or barons of Hell on Ultra-Violence (UV) and Nightmare skill levels. Enter the south alcove and press the skull switch inside it, then exit the room as the floor rises again.

Return to the room where you found the second pentagram button, and note the door that has opened in the west wall. Look round the sides of the door to kill two chaingunners waiting to ambush you, then go through and collect the BFG9000 before pressing the third pentagram button on the back wall, which will lower the west cage in the arena and release the third cyberdemon. Try not to awaken this enemy until you return to the arena, or it will block the sunken staircase and you will have to risk being blasted by rockets as you run past it.

After killing the third cyberdemon, enter the west cage and press the south button to open the nearby door, revealing a blood pool containing one to three mancubi. After killing all of them, press the south button followed by the north button then run through the door and head west across the blood (which inflicts 20% damage) to press a third button in the back wall before it shuts.

Go back through the sunken staircase and up to the large room, where a door in the west wall has opened. Go through it and head down the steps to a dark room, kill two chaingunners lying in wait on either side of the entrance then press the fourth and final pentagram button on the back wall. Go back to the arena and slay the fourth cyberdemon that has been released from the south cage, then go inside it and press both buttons in quick succession to open the doors between them.

Go through the doors to enter a large marble hall overlooked by several chaingunners; the chaingun inside the blood pool in the middle of the hall may help you get rid of them. Go up the steps and walk through the doorway in the south wall, then turn left and follow the hallway round to a berserk pack in front of a button. Press this button then go back to the marble hall and dispose of all the demons blocking your path, then return to the entrance door and press the skull switches on either side to get it open so you can leave the hall.

Steps have risen around the pillar in the middle of the arena, allowing you to climb up to the yellow keycard. Take it then go to the yellow key door in the south-west corner and open it to find two spectres guarding a white teleporter; this teleporter is marked with an exit sign, but when you step on it the surrounding walls will lower to reveal many boxes of rockets. Grab all of them then arm yourself and go back outside - the east and west walls of the arena have lowered to reveal 12 (Hey Not Too Rough or lower), 18 (Hurt Me Plenty) or 26 (UV or higher) revenants.

Dispose of all the revenants then enter the west closet and press the button in the back wall. Go back outside and look in the south-east corner of the arena, where some silver barriers have opened allowing you to reach the real exit teleporter leading to MAP32: Go 2 It.

An alternative strategy entails keeping the last cyberdemon alive to cause monster infighting, making the final trap significantly easier. To do this, lure the fourth cyberdemon towards the north of the map, run past it to the southern structure, then continue progressing the map until the fake teleporter pad triggers the final revenant ambush. The cyberdemon will make short work of the revenants with its rockets. However, take care not to get boxed in as the cyberdemon roams around.