MAP31: Cybernation is the first secret map of Plutonia 2. It was designed by Alexander S. (Eternal), and uses the music track "Sinister" by Robert Prince. The par time defined in MAPINFO is 2:00.

As with Plutonia's secret level Cyberden (which Cybernation appears inspired by), there is no 'secret exit' to be found as opposed to a normal exit that would return the player to MAP16. Instead, completing this level must take the player to MAP32: Go 4 It. The intermission text before the level is a modified quotation from H. P. Lovecraft's The Call of Cthulhu, and states, They lay in the stone houses of their court, preserved by spells for a glorious resurrection when the stars and the Earth might once more be ready for them. 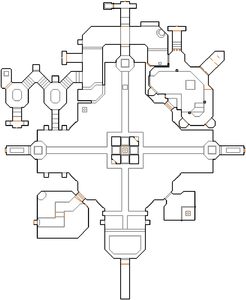 Map of Cybernation
Letters in italics refer to marked spots on the map. Sector, thing, and linedef numbers in boldface are secrets which count toward the end-of-level tally.

From your starting point, head around and to the right. Grab the super shotgun and dispose of the spectres. You have two stairs to choose, pick the one on the right for now. Pick up the plasma gun in the next hall and near the demonic pentagram is an arch-vile. He will teleport away, so press the pentagram. The wall nearby will open up, revealing Hell knights and demons. Now you should return to the main area, but the arch-vile from before will attack you behind an invisible wall once you reach the room where the super shotgun was. Get rid of him, and in the main area on the right side, two cyberdemons will be active. One is guarding a door that you cannot open, while the other is in front of a switch (in the central pillar). Flip the switch after killing the cyberdemons, then press the gargoyle switch on the northeast side of the pillar. This will lower a door behind you. Quickly run to the other door and open it directly before the other one rises, and then kill the chaingunners in the next room. Climb the steps up and head around the ledge, looking out for the demons that appear in front of you. If you flipped the lever switch from before, there should not be any bars blocking you from reaching the second demonic pentagram.

Get rid of the chaingunners guarding the pentagram and press it, killing the revenants that show up in the room afterward. Press the lion switch and open the door to return to the main area, and then fend off two more cyberdemons, on the left side. Flip the left lever switch on the central pillar and then press the lion switch on the southwest side of the pillar, quickly running to the southwest door after pressing it. When you walk into the next room, the blood pits will rise with mancubi in them. Get rid of them, get the megaarmor in the corner, and then press the switch on the other side of the walkway. Leave the room and then head back into the northwest area. This time, take the stairs on the left, where you will find an arch-vile (who will teleport behind a light fixture that you had passed, harassing you) and two barons of Hell. Dispose of them and press the demonic pentagram, returning to the main area to fight off two more cyberdemons, this time on the northern side of the area. Flip the switch on the north side of the pillar, and opposite of that, a wall will lower. Hit the satyr switch to lower the lift, then kill the arch-vile and demon guarding the demonic pentagram. Once more, press the pentagram, return to the main area, and kill the cyberdemon here. There is only one of them, guarding the southern switch. Flipping it lowers the presumed exit with an arch-vile on top of it.

Only that is not the exit, yet. Stepping on it makes the doors to the sides open up, revealing revenants. The wall to the south also opens with arachnotrons and a spider mastermind. Finally, a cyberdemon and some demons teleport in from the north. Behind the revenant hordes and inside the left and right rooms is a switch. Hit both switches, and the southeastern door and exit room will be open. Kill the spectres and exit.

* The vertex count without the effect of node building is 872.