MAP31: Cyberwar 7734 is the first secret map of Valiant. It was designed by Paul DeBruyne (skillsaw) and uses the music track "Stars", originally composed by Stuart Rynn for Speed of Doom. The par time is 20:00. 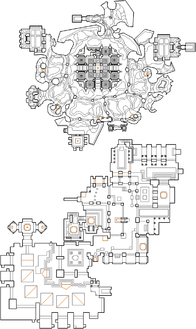 Map of Cyberwar 7734
Letters in italics refer to marked spots on the map. Sector, thing, and linedef numbers in boldface are secrets which count toward the end-of-level tally.

Take the shotgun and enter the portal in front of you, ready to dodge a waiting revenant. Take the super shotgun on the gray step, watching out for super imps, zombiemen and chaingunners that overlook it, then go up the steps on the west side to reach a room with a yellow floor protected by an arachnotron along with more imps and zombies. Take the rocket launcher sitting on the gray step if you need it then go through the east doorway and follow the yellow path to a block with a supercharge on it. Taking the supercharge will open the north and east walls to reveal a pack of cacodemons, along with several revenants and a super mancubus standing on a platform to the east. Run north across some orange pillars to reach a large hole that will teleport you to the next area.

You will be in a small chamber containing a BFG9000 and a megasphere, along with backpacks and energy cell packs - once you start moving, the floor will lower to reveal a larger room with 16 pain elementals. Head through the doorway on the north side and activate the lift on your left, ride it up and turn left to return to the previous room - the outer walls will lower to reveal packs of super demons, super spectres, imps and arachnorbs. Push past these enemies to get out to a large cavern that is filled with lots more enemies, including two spiderdemons to the east. Go to the north side of the cavern then turn left to see another portal being guarded by a cyberdemon; step through this portal to return you to the grid area.

You will find yourself on a green ledge with several large ammo pickups and a radiation shielding suit. Take the suit and drop into the damaging black liquid below - you will see the white wall to the east lower, revealing packs of demons, imps and pyro knights, as well as several mancubi and arachnotrons standing on the ledge behind them. Go up the yellow, white and blue steps in the north-east corner to reach a room with two white blocks and several boxes of rockets, then proceed east through three doorways (which hold a supercharge and two megaarmors) to a neighboring room with a plasma gun. Continue north into a large hall with arachnotrons, then go up the orange steps in the south-west corner and follow the walkway west until you can drop off the north side, into a second hall with an invulnerability and megasphere at the north end.

Hold off on taking the invulnerability for as long as possible - chaingunners and arachnorbs will teleport to the white platforms on either side of the hall, and a third hall containing cacodemons will open to the north-east. Fight your way out and return to the room with the plasma gun, where the south wall has lowered to reveal a horde of revenants and zombiemen, then continue south to a yellow walkway that you can follow west past some arachnotrons and arachnorbs to a green ledge with mancubi. At the west end of this ledge you can run across some orange platforms to find another portal which leads to a small chamber with energy cell packs and boxes of rockets; once you start moving you will find yourself at the south end of the cave area, but do not stay here as you will soon be surrounded by revenants.

Two large compartments will have opened on either side of the cavern - the west compartment contains cacodemons and pain elementals, while the east compartment holds demons, spectres and two cyberdemons. Battle your way to the east compartment and go to its east side, where you will find a supercharge and megaarmor along with a portal leading back to the grid area. As before, you will find yourself on a green platform with large ammo pickups and a radiation suit - pick it up and drop to the black liquid below, then head west to a large blue platform with another cyberdemon. The white walls in this section will lower to reveal many revenants and pyro knights; fight your way through then run south until you go over an edge and land on a large white platform below. There are several more platforms leading west and north that you have to cross; as you step on each platform, a compartment containing more enemies will open nearby. Once you reach the final platform you will find your progress barred by a cyberdemon and twelve pyro knights; push past them to the exit room then enter the exit teleporter on the west side to go to MAP16: Toxic Traverse.

In the exit room are three skull switches that can only be activated if you have found the colored keycards hidden throughout the map. The yellow and red keys are found in secrets 2 and 4 respectively, while the blue key can be found in a tunnel at the north-west end of the black liquid area - the tunnel opens after you teleport back to the grid area for the third time, and contains two cyberdemons. Pressing all the skull switches will lower the east wall, revealing a second exit teleporter leading to MAP32: Ghosts of the Old Kingdom.

* The vertex count without the effect of node building is 7729.

7734 reads as HELL when typed into a seven-segments calculator and read upside down.