MAP31: DejaVu is the secret level of Memento Mori II. It was designed by Orin Flaharty and uses the music track "Bavor The Mad" by Mark Klem. It is designed in a techbase style reminiscent of Doom's Knee-Deep in the Dead, hence its title. The title name comes from French expression "deja vu", which is that psychological sensation of you are repeating some past situation that you have already saw or witnessed in life. 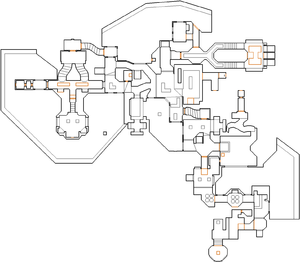 Map of DejaVu
Letters in italics refer to marked spots on the map. Sector, thing, and linedef numbers in boldface are secrets which count toward the end-of-level tally.

As the name suggests, DejaVu plays a lot like a Knee-Deep in the Dead map, specifically E1M7: Computer Station. However, it boasts far more monster closets and larger teleport traps. The red and yellow keys are required to access the regular exit, and can be collected in any order. The blue key is required to get the red key. However, the secret exit only requires the yellow key.

You begin in a small room. Collect the shotgun and box of shells, as well as a rocket. When you open the door, you will be immediately set upon by enemies:

You don't have much room to fend them off, so use secret #1 for extra assistance. When they are dead, head up either flight of steps to a corridor running east-west ("the starting corridor"). The door in the west leads to the locked doors before the regular exit, while the door in the east is locked. Go through the door at the end of the corridor in the south. In this room, there are up to six imps. Kill them, grab the armor and chainsaw, then flip the switch in the south of this room to unlock the door in the east.

Head back to the starting corridor, then head east. You will come to a pair of corridors infested with shotgun guys, imps and demons. The northern corridor has a window from which a horde of zombiemen in a courtyard can attack you, so be wary. At this point, you may wish to head to the southern corridor and find the hexagon-tiled area extending to the south, with up to right imps and a baron of Hell. After killing them, you will be able to get a plasma gun, which will come in handy in dealing with some of the teleport traps that come later.

From the junction, head north, then east to a blue door. You will come to a series of open-air corridors and be attacked by up to two shotgun guys, two demons and an imp. At the fork, head down either corridor and kill a shotgun guy and a spectre (not on Hey, not too rough and below). Head down the steps into the red key room, which is in the middle of three alcoves in the east of the room. Kill the shotgun guy, zombieman and demon in here first. When you pick up the red key from its alcove, a large teleport ambush is set off:

There is an invulnerability in the southeast corner of the red key room. Take it, pull out the chainsaw, and get to work on these enemies. Once done, backtrack to the junction, but just after heading back through the blue door, watch for a trap to the north with two imps and three shotgun guys (two on Hey, not too rough and below).

From the junction, head south and open the door in the east. Head up the steps to a square room with seven health bonuses and two stimpacks. Head south to find a loop of corridors infested with shotgun guys, imps and demons. You have to be more careful in this set of corridors, as there are some barrels scattered around. In the southeast of this area, heading east allows you to reach a platform with a blur artifact, but collecting it will trigger a trap nearby with up to two imps and three shotgun guys.

Head through the door in the south. Lower the platform at the end of this short corridor and ride it up to a brown room with two computer cubes hanging from the ceiling. Go south, then east to a long corridor infested with zombiemen, shotgun guys, imps and demons. In the east of the corridor is a brighter room - watch out for up to two shotgun guys, three imps and a demon here, as well as a spectre waiting in ambush in an alcove near the entrance of this room.

From this bright room, go south, then west and ride the platform up to a computer room with glowing lights. There are shotgun guys, imps and demons in here, and they may be hard to see. Head southwest, and you will be attacked by up to three zombiemen protecting a rocket launcher in the north, as well as up to seven imps int he yellow key chamber in the south. Because of all the shooting going on just now, the first phase of a two-phase teleport trap in this area is likely to have been activated, and monsters will begin teleporting between the rocket launcher pad and the yellow key chamber. If you are counting kills:

When you grab the yellow key from its chamber, the second phase of the teleport trap activates, teleporting monsters into the same location as the first trap:

You need to backtrack to the extreme west of the level (west side of the corridor running-east west near the start of the level). On the way there, you need to be careful of four traps:

Open the door at the west end of the starting corridor. Watch for up to nine shotgun guys in the courtyard beyond the windows. Open the red exit door, followed by the yellow exit door. Flip the switch to end the level and be taken to MAP16: The Nephilim.

You also need to backtrack from the yellow key area. However, once you hit the room with two computer blocks hanging from the ceiling, quickly go to its northeast corner. A hidden door should have opened into a nearby slime pit. (If the door is closing/closed, quickly step into the darker corridor to the east again to open it up). Grab the radiation shielding suit nearby and jump out into the slime. Head for the northeast of the slime pit, where you will find a narrow channel heading into darker slime. Go west, then north to find a secret platform with a UAC door. Open the UAC door, open the (yellow key-locked) exit door at the end and flip the switch to end the level and be taken to MAP32: Dances with Demons.

* The vertex count without the effect of node building is 1296.

Unlike another level from Memento Mori II designed in Knee-Deep in the Dead style, MAP24: Io Lab, this level features only Doom monsters. In fact, in DejaVu there is even more restraint than in MAP08: And the Dead Shall Rise from Memento Mori, also designed by Orin Flaharty, as lost souls and cacodemons are also missing. This means that in this secret level the player can only encounter monsters from Knee-Deep in the Dead. Regarding weapons and equipment, the design is slightly less consistent: megaspheres or super shotguns (from Doom II) are absent, but the player can collect a plasma rifle, berserk pack, or an invulnerability sphere (present in Doom, but not in its first episode).