MAP31: Desiccant Room (or Dessicant Room on the intermission screen) is the sixteenth map of Hacx. It was designed by Stephen Watson. 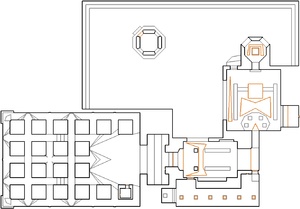 Map of Desiccant Room
Letters in italics refer to marked spots on the map. Sector, thing, and linedef numbers in boldface are secrets which count toward the end-of-level tally.

You begin in an area with many square blocks - turn left (north) and walk forward until you pass the second block, then turn right and head straight forward to find the KeyCard being guarded by four androids (or buzzers on "Let's rip them apart!" skill level or higher). Head due east to a wide door and destroy the androids waiting on either side, then press the white panel beside the door to open it and reveal more androids, which will teleport behind you when they get close to the door. Head straight forward between some hanging bodies until you enter a dark hallway then turn left to enter a wide hall with some thugs.

As you enter the hall, the computer screen in the east wall will open to reveal a compartment with more thugs and androids - enter this compartment (if it closes, go back to the hall entrance to open it again) and flip the switch inside it to lower a barrier in front of the north exit, then go through this doorway and step into the square hole in front of you to finish the level.