MAP31: Devastation is the thirty-first map of Kama Sutra. It was designed by Adolf Vojta and uses the MAP08 music from TNT: Evilution. It is a modified version of Heretic E1M5: The Citadel intended to play like Hell Revealed MAP22: Resistance is Futile.

This map is remake great The Citadel from Heretic. We wanted some map reminding good old HR22 and then I suggested to Method that he could redo this one. Well, at the end I did the map myself probably harder then I planned but we know there are players who could do it. :) About the design I let the map in the original shape, but I had to rebuild some buildings to have the design more simple. I still wonder if HR22 wasn't originally inspirated by the heretic E1M5. 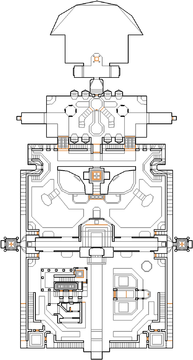 Map of Devastation
Letters in italics refer to marked spots on the map. Sector, thing, and linedef numbers in boldface are secrets which count toward the end-of-level tally.

To enter the secret exit, jump in one of the rivers after the blue door, open the skull, teleport and run. The second blue door will be opened a few seconds.

* The vertex count without the effect of node building is 2402.