MAP31: Diabolus Ex Machina is the first secret map of Hellbound. It was designed by Zoltán Sófalvi (Z86) and uses a MIDI rendition of "Hellbound" by Pantera. 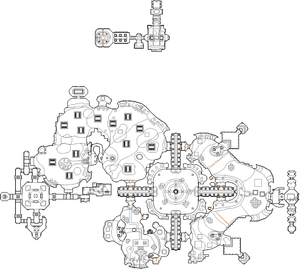 Map of Diabolus Ex Machina
Letters in italics refer to marked spots on the map. Sector, thing, and linedef numbers in boldface are secrets which count toward the end-of-level tally.

To get to the second secret level the player must kill 5 "Commander Keen" figures scattered around the map for the secret exit door to open.

The locations for the Command Keen figure are:

Once the Commander keens are killed head to the map exit, right in the same section you will see some Nazy looking room that is your secret exit.

The sections that make you access level 32 do not count a secrets in the secret count. You must kill 5 hidden "Commander Keen" (hang figure) to open a wall in the room where the regular exit is. The locations for this figures are:

Once this is done you will be able to access a room with Hitler picture located very near where the normal exit is, this is the entrance to the last secret level. As a curiosity, you can actually walk into the regular exit and check something interesting there as you will be able to walk back again.

Since it is not possible to actually step on Secret #3 due to the way it is constructed, only 66% secrets is possible on this map.

* The vertex count without the effect of node building is 11597.