MAP31: Disarming the Mechanism is the secret level of Community Chest 3. It was designed by Chris Kassap (lupinx-Kassman), and was the author's sixth level. It uses a MIDI conversion, by Sephiroth3, of the music track "Old Sense" from Zero Wing, which plays in the "Submarine Tunnel" stage.

In this level, the hellspawn have armed a viral bomb at the core of the Theta Complex, with the intent of destroying the world. Your objective is to find the bomb, and disarm it within 30 minutes.

This level contains a secret exit leading to MAP32: Installation 07 Warszawa, which can only be reached by disarming the bomb. Completing this level through the normal exit takes the player to MAP16: Hangman's Noose.

Map of Disarming the Mechanism
Letters in italics refer to marked spots on the map. Sector, thing, and linedef numbers in boldface are secrets which count toward the end-of-level tally.

There is an inaccessible invulnerability sphere in sector 1443 in the deathmatch-only area, so 100% items is impossible to achieve in single-player. Note: It is also inaccessible in deathmatch, and can't even be seen. 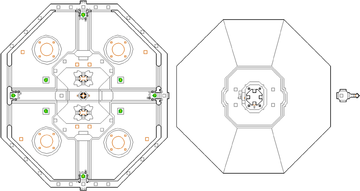 * The vertex count without the effect of node building is 8227.

The original "story" of this level was that the Nazis had taken over a base and had a bomb set to destroy Community Chest itself. The monitor at the normal exit also told the player that if they did not disarm the bomb, they would not reach "Shadow Dweller's level." All of this was changed at the request of playtester Eric Baker (The Green Herring), who felt this was an inappropriate break of the fourth wall.

Also, ironically enough, both map16 and map32 were made by Shadow Dweller.

This map is notable for utilizing the voodoo doll effect to simulate the timer by placing the doll in an isolated room full of explosive barrels and a very tall crusher. After approximately 30 minutes have passed and the player has not yet disarmed the bomb, the crusher reaches the barrels and crushes them, detonating the entire room and killing the player in the process (unless the God mode cheat is enabled before it happens).