MAP31: Entryway is the thirty-first level of PlayStation and Sega Saturn versions of Doom, and the first level of the Doom II episode. It is based on the original MAP01: Entryway with modifications made to adapt to the consoles' limitations. The author of the original map is Sandy Petersen. 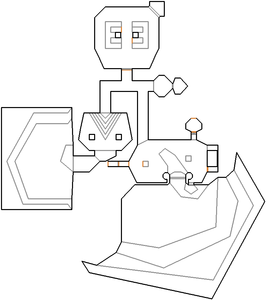 Drop down from the starting ledge to the staircase. Enter the corridor and turn right, then turn right again. The corridor leads into a room where the exit is located. Open the door in the northeast corner and push the skull switch behind it.

If you want a chainsaw, do not walk off the starting ledge immediately. Instead, turn left to see a small windowed room and take the chainsaw.

In the outside areas, a grey brick that was not used in the original version of the level is applied to nearly every wall of the aforementioned areas.

The chainsaw room is no longer open to the sky but has a ceiling. In addition, it features transparent windows exclusive to these versions rather than having a cage.

The northern room, with the structure in the center, has been shrunk vertically. The green metal walls now feature blue triangles in the same manner as the corridor located before.

In the penultimate room before the exit, the lit sectors around the two square platforms have been removed and the platforms themselves have blue lights. The raised floor section in the middle of the room has a simpler shape and the step in front of the window is smaller.

The switch to open secret #3 is not lit (to not give an impression whether it was already flipped) but still functions like normal.

The outdoor area for secret #3 has a slightly different shape and the outermost section has been shrunk.

The original version of this map had a minor issue with secret #4: instead of having adjacent floor texture the openable wall had the wrong one. This was fixed in the current release to feature only one flat.

The rocket launcher room is not counted as secret when the player triggers it. This can be due to the sector thought to be the secret has been applied another sector type which is responsible for the slow light oscillating (only a single type can be applied to a sector, at least in vanilla). It is unknown whether it is intentional or a design bug.

* The vertex count without the effect of node building is 309.