MAP31: Festering Wicked Helix Sectors is the first secret level of Resurgence, accessed from MAP15: Nukage Bay. It was designed by Josh Sealy (Joshy) in the style of Xaser Acheron, and uses the music track "Day of Mourning," composed by Stuart Rynn (stewboy) specifically for the level.

The level takes place around a large Gothic-themed structure, castle-like in design, with plenty of large pools of blood. Situated near the structure is a huge tower, which the player must get to. However, the level features a twist: In the vein of Xaser's Wicked Garden, and TNT: Evilution MAP04, a second version of the level exists, which is darker and mostly abandoned. This alternative version appears at the very end of the level, and it is here that the tower is accessible.

The level was originally designed for the Secret Santa Imitation project led by Brian Knox (Snakes), in which mappers would be assigned to another mapper, and have to make a level in the style of the mapper they were assigned to. After signing up to the project, Sealy was assigned to Xaser Acheron. Sealy carefully studied MAP15 and MAP25 of PRCP, E3M0 of ZPack, and E2M26 of Back to Saturn X to learn the main features of Xaser's maps. The name of the final product is an amalgamation of the names of these maps. A full description of the development of the level is included at the end of Resurgence's text file. 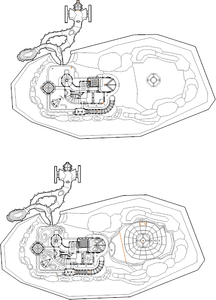 Map of Festering Wicked Helix Sectors
Letters in italics refer to marked spots on the map. Sector, thing, and linedef numbers in boldface are secrets which count toward the end-of-level tally.

All secrets apply to the first part of the map. The corresponding areas in the second part are empty, and do not count as secrets.

* The vertex count without the effect of node building is 9209.