MAP31: Fireking Says No Cheating is the secret map of the second episode of Back to Saturn X. It was designed by Josh Sealy (Joshy), Sarah Mancuso (esselfortium), and Boris Klimeš (dew), and uses the music track "Vinefort," composed by James Paddock (Jimmy). In the official add-on version, this level's name is Slamdance with the Sun God.

This level is accessed from MAP15: The Theory of Broken Circles. 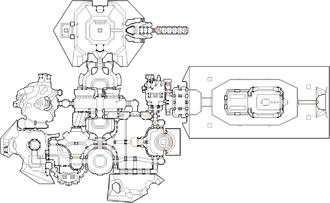 Map of Fireking Says No Cheating
Letters in italics refer to marked spots on the map. Sector, thing, and linedef numbers in boldface are secrets which count toward the end-of-level tally.

* The vertex count without the effect of node building is 6196.

Likely an error, the map is referred to as "The Spirit World" with regular font on the pre- and post-level intermission screens for the official add-on. Other levels do not exhibit this behavior.