MAP31: Fort Shriek is the thirty-first map of Project Einherjar. It was designed by Mike MacDee (Impie) and uses the music track "". 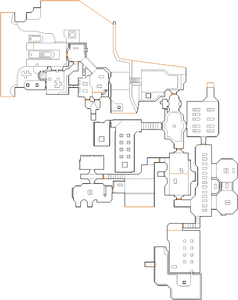 Map of Fort Shriek
Letters in italics refer to marked spots on the map. Sector, thing, and linedef numbers in boldface are secrets which count toward the end-of-level tally.

This map is divided into two sectors: the harbor and the police station.

The harbor is a mayhem of Jotun soldiers attacking from all sides: find a good, defensible position and hold them off to the last man. Several Lancers take potshots at you from the rooftops with their Gauss cannons, so get indoors as quickly as possible.

Once the harbor is cleared of enemies, hoard all the supplies you can. The upstairs switch in the warehouse opens the side door that leads to a set of mines and an auto-shotgun; it also summons a team of Jotun Overwatch troops by raft. Deep inside the harbor base is an office with a switch that opens the door to the police station.

Inside the police station entrance is an eerie shrine to the late Baron Frostgard, and a squad of Overwatch troops. From here the building splits three ways: the garage, locked behind a red door; the jail, which houses the blue key; and the courtyard, which connects several offices crawling with troops. The further of the two offices has a Thane with the red key you need to enter the garage; the closer office has a blue door leading to the exit.

Arm yourself before entering the garage and taking on the Sheriff who commands Fort Shriek. He drops the yellow key when killed: use it to open the cages in the jailhouse and grab the blue key. The blue door leads onto the roof, where a Thane ambush awaits. Drop through the air vent to the ground and kill the Lancers guarding the exit switch. Be sure to resupply before the drop, as you won't be able to return to the roof.

Until you open the storehouse side-door leading out to the auto-shotgun, the second pier is vacant; once you open the door, the pier becomes occupied by a small attack boat and a squad of troops.