MAP31: Great Balls of Fire is the secret level of Icarus: Alien Vanguard. It takes place in a small simulation, and was designed by Jim Lowell. It uses the music track "Gresta" by Tom Mustaine. 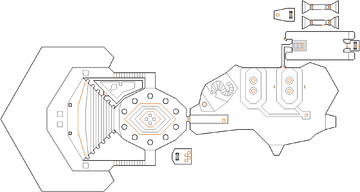 Map of Great Balls of Fire
Letters in italics refer to marked spots on the map. Sector, thing, and linedef numbers in boldface are secrets which count toward the end-of-level tally.

Take any of the teleporters at the start. When you arrive, just open the door that is to the east. You will see a teleporter at the end of ledge. Do not go in it, instead, jump to the water below on the right and you will find the red skull key in the corner there. After picking it up, go around the light brown rocks until you find a switch. Flip this switch to lower one of the rocky walkways as a lift, then head northwest into the opening before it rises. In the marble hall, there are mancubi and revenants, and after killing them, lower the wall to the east to find the normal exit teleporter.