MAP31: Grey Dwarf is the first secret map of Ancient Aliens. It was designed by Stuart Rynn (stewboy) who also composed the level's music track, "Tribal Dance." The par time is 16:00. 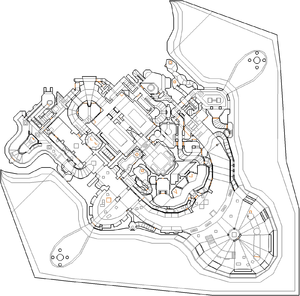 Map of Grey Dwarf
Letters in italics refer to marked spots on the map. Sector, thing, and linedef numbers in boldface are secrets which count toward the end-of-level tally.

Begin by heading straight out of the room you're in, picking up the shotgun and straferunning to get the security armor. Around either corner will have some imps and stealth plasma aliens on ledges, with an alien guardian floating in. Continue down the hall and find the super shotgun as well as two chaingunners next to a lift. From here you can head down the center to the next room. Alternatively, go into the northern passage to deal with a Hell knight, then strafe onto the upper waterway and use the wall at the end of the hall to enter the same room. Go around the corner and down the left stairs (the right side blocked by a set of bars guarding a door) after dealing with a couple of revenants. In this orange room you'll find a switch that will raise the bars. Interacting with any of the computer panels will raise a wall outside of the room with a backpack and an archvile.

On the other side of the door, you'll find yourself in the main hallway. The doors nearby all contain ammo and health, so continue towards the southeast. The orange stairs to your right are entirely optional. Eventually, you'll reach a room with a rocket launcher and some boxes of rockets on the floor. Grab these and deal with the teleporting revenants and arachnotrons. Head again down the hall to the large teal-colored room and drop down. Use the lift on the left side and hit the switch at the top. This will raise a bridge to the blue key and activate an ambush. Grabbing the blue key will release some archviles tucked away in the central pillar. Press the switch inside this closet to lower a lift back up to the main hall.

Open the blue door on the other side of the lift. Turn left and go up the elevator to the balcony above. Press a switch here to open the door to the right of where you entered the room. Head down through the open hall. The doors on either side lead to items and secrets. The trench ahead drops down to a path that leads back towards the beginning of the map, as well as the switch to open the secret exit (which requires the yellow key found in another secret.) Eventually, you'll end up in a large room. Enter the red door and head down the catwalk to press a switch in an alcove. This will raise a door with a lightning bolt on it halfway up the stairs. Inside is the exit teleporter.

After entering the main hallway, continue until you find a set of orange stairs to your right. Head down and through the hall, dealing with stealth plasma aliens and an archvile. The stairs to the inner room with the caution railing leads to a secret switch. Another set of stairs on the northeast wall leads to a door on the left. Go through this door and down the stairs until you find the plasma gun. This triggers an ambush with a bunch of alien guardians. Back in the small hallway, continue into another room with a revenant on a ledge and two stealth plasma aliens on the ground. In the back of the room is a switch that lowers a lift. This lift will give you access to the ledge the revenant was on (which has an energy cell pack) and a switch which unlocks bars that lead back to the start of the map.

The trigger line for the plasma gun trap is broken up into multiple linedefs, and if more than one is crossed, the trap's hidden doors open multiple times to reveal untextured wall pieces.

A stimpack (thing 505) on a lift at the green checkered corridor rests just barely on the upper ledge, making it appear to float when the lift is lowered.

* The vertex count without the effect of node building is 4777.