MAP31: House of Corrosion is the first secret map of Sunder. It was designed by Insane_Gazebo and uses the music track originally composed by B.P.R.D for The Mucus Flow. 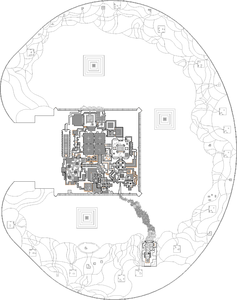 Map of House of Corrosion
Letters in italics refer to marked spots on the map. Sector, thing, and linedef numbers in boldface are secrets which count toward the end-of-level tally.

Get the super shotgun and boxes of shotgun shells, then get the megasphere, shotgun, and backpack before heading out. You are treated to a splendid sight, but there is nothing to do except go on the pathway into the large green building and through the crack. At the bottom will be your first battle, with three revenants in front, Hell knights scattered around, four more revenants near the back, two barons of Hell on the east side, and shotgun guys on a high ledge above. A cyberdemon is inside the middle block along with a switch, which opens up the door to the north. Make note of the yellow door at the southeast end before moving on.

In the next room you will find the plasma gun, a soul sphere, and a switch. The switch lowers the side walls, with a cyberdemon on the high ledge to the west and a large horde of Hell knights and cacodemons to the east. A rocket launcher is in this tunnel as well. Moving further along this tunnel you will find a horde of revenants. There will be a switch on the east wall as you continue north, which opens the door back to the starting room. Head west, then north down the steps, but not all the way yet. Enemies will show up in alcoves behind you, including chaingunners, Hell knights, and a revenant. A baron of Hell is just around the corner, and the path dead-ends in a cage with stimpacks and a switch.

The switch opens up the way north from the plasma gun room. Maneuver across the platforms, being careful not to fall in as there is no way out of the green sludge. When you reach the soul sphere platform, three compartments open up. To the right is a mancubus, to the left are eight chaingunners and a switch, and to the north are cacodemons and three lost souls. A trail of health bonuses leads to the top of the left tower. Go on this trail up and press the switch, then the way to the west will be open. Maneuver across the platforms with rockets on them to reach this passage.

This area has four connected rooms, and four megaspheres are on the windows of these rooms. There are two cyberdemons currently present, but you will also have to contend with Hell knights and revenants who will teleport into any of the rooms. The close quarters will make this area quite difficult. When you are ready, enter the northwest room and press the switch on the west wall, then go to the southeast room and press the switch on the south wall. You can then continue southward. In the dark hall that follows, the northeast wall will open revealing cacodemons, pain elementals, revenants, and Hell knights. Continue further to reach a fork. The south end is a dead end with a soul sphere, so head north and at the west bend, turn around to fight two arch-viles. Another one will be further to the north, and you will be on the platform that had the cyberdemon on it. Press the switch here, then go to the south end of the fork to find another switch, which opens the door back to the starting room. Two arch-viles are now on the east end of this room, guarding the yellow key.

Open the nearby yellow door and use the switch at the southeast end. You will have a close quarters encounter with a mancubus at the south end and barons of Hell at the west and east ends. When done, take the path northeast all the way to the ledge that had shotgun guys on it. Enter the side room for a soul sphere and a baron of Hell, then press the switch on the ledge. Head back to the starting room and go southwest, back to where you re-entered this room, and go west.

The next set of areas will test your ability to handle congested encounters. When you reach the four-way intersection in this small corridor, the surrounding walls open up revealing twelve Hell knights. A switch at the northeast end opens the south door, and in the next hallway four revenants will come from the side walls. Enter the next room for the southeast wall to reveal lots of Hell knights, then press the switch to the south to open the door to the east. At the midway point in this corridor the side walls will reveal two arch-viles and six cacodemons, with the switch in the room with the cacodemons opening the door at the end of this corridor. You will be back at the four-way intersection from before, and the west door will be open. Be prepared for an ambush with one pain elemental and four revenants just before the next big room, then press the switch where the pain elemental was to open the north door. In the next corridor, go past the door and the next ambush will feature lost souls to the south and five barons of Hell to the north, with a switch in their area. The switch opens up the door to the southeast, leading back to the four-way intersection, as well as the door just to the left. The hallway that follows is wider, but you will deal with considerably more monsters, including three lost souls, chaingunners, five demons, four mancubi, revenants, and Hell knights. Press the switch and head back to the big room, where one of the south doors will be open. This next hallway will be the hardest, as at the midpoint, you will be surrounded by spectres and no less than eight arch-viles. Go back into the previous room as soon as possible and try to weed them out, then return and press the switch. The other door to the south will be open, and when the next wall opens, you will find a megasphere and a switch. After using this switch, go back to the four-way intersection and the north door will be open. Follow this hall down.

When you drop into the next area, it will be empty, with another switch that needs to be pressed. Once you press it, make sure you are prepared. In front of you will be lost souls, cacodemons, and a cyberdemon. To the north is a high ledge with seven mancubi, revenants, four lost souls, and a cyberdemon. The high ledge to the northeast contains chaingunners. The square at the southwest end will have Hell knights and revenants teleporting on it. Finally, chaingunners, revenants, and Hell knights will appear at the southeast end, and there are two corridors leading to a smaller room where six arch-viles are. Your goal is to the southeast, through a dark corridor that empties into a room with green poles over the sludge. Mind your movement as you go across these poles to the switch, then head back and take the open path just north of the square to the northwest portion of the area. From there, hop the platforms going east until you are on the high ledge with the chaingunners. Grab the soul sphere and head into the dark corridors ahead. There is a megaarmor at the east, and you will have to wait for a switch to become available at the north end of these dark corridors. Meanwhile, five arch-viles will teleport into the area and will teleport all around, making them a major hassle. When the switch becomes available, press it and go back to the big room.

The way north will be open. Press the lion switch to open the bars to the east, where you came from, then continue north. Here is a minor platforming segment, so be sure to watch your footing and never fall in. Getting on the first platform causes the door to close behind you, and reaching the second platform opens a wall in front of you with lost souls and a pain elemental behind it. Get to their platform and continue east. Press the switch to return to the area with four connected rooms. You need to go to the passage that is straight to the east now. When you enter, quickly turn to the south. You will notice that five arch-viles will have teleported to the rooms you were in before. Quickly grab the invulnerability and other supplies and press the switch, then return to the connected rooms to get rid of the arch-viles and any enemy that has been resurrected. Now return to the platforming segment and continue north; the way is open. Grab the soul sphere, then go further north. At the second platform, walls will open revealing lost souls and cacodemons, and a spider mastermind is further to the north. Head back to the starting platform if necessary before moving on.

Go to the platform with the spider mastermind and use the switch here, then maneuver across the platform to the open door to the next area. Grab the BFG9000 in the middle, being mindful of the large pit where it is at. There will be three arachnotrons to the south, four mancubi on a high ledge to the northeast, and a horde of Hell knights, barons of Hell, and eight pain elementals to the west, where the next switch is located. This will open the way to the east. Entering this new area causes the east wall to open, revealing cacodemons, pain elementals, barons of Hell, and six mancubi. Entering the hall further to the east will cause the inner wall to open revealing arch-viles, cacodemons, and barons of Hell. The switch here removes the barrier at the steps going upwards in this area. With that switch pressed, go all the way up the steps all the way to the high ledge with mancubi on it. Use the lift switch and ride it up. You will now be able to leave the large building, so hop the floating blocks to the west, being careful not to fall. Return inside the building and follow the path all the way to the exit. The exit leads to MAP32; there is no alternate exit in this map.

* The vertex count without the effect of node building is 25785.