MAP31: I Dunno Torn is the thirty-first map of Scythe. It was designed by Kim Bach (Torn), and uses the music track "Onyx" from Heretic's E2M6: The Labyrinth. This is the only map in the megawad not to have been designed by Erik Alm. 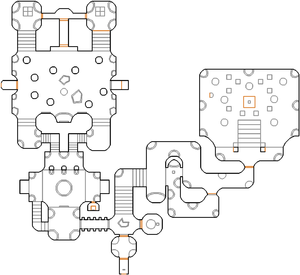 Map of I Dunno Torn
Letters in italics refer to marked spots on the map. Sector, thing, and linedef numbers in boldface are secrets which count toward the end-of-level tally.

From the start head through the big room to either staircase in the southern part of the room. If you want to go to the secret exit, you can do so in the next room. Go up the staircase at the south end of the room opposite of the shotgun guys in the hallway, and you will end up on one of the balconies overlooking the room. Be alert in case you have not killed the arch-viles in the cages here, and from the northern edge of this balcony, jump across the slightly-mossed platforms to the other balcony. Over here, open the slightly-mossed wall to the south to find the secret exit.

If you want to get the normal exit, you can head down the aforementioned hall that had shotgun guys in it. The next room will have two key doors and some stairs going down with demons hanging around them. Go down these stairs, and you will find a caged area with Hell knights and barons of Hell. Move around this cage to the first door you see and take it. You will end up inside the caged area where you can pick up the yellow skull key. Now exit this area and head to the next door to find another big room. There are imps, cacodemons, and spectres in this room, and the red skull key is sitting in the middle. When you attempt to get it, imps will teleport around the room. There is a switch on the left-hand side of the room which raises some stairs for you to leave the room, so take those and return back to the two locked doors at the top of the previous stairs. Open the yellow one to find a simple room with two Hell knights and the blue skull key. Now open the red door and the blue door to take the normal exit.

The BFG9000 is guarded by a teleporter that transports you to the east side of the map, and is thus almost impossible to grab due to said teleporter being one way without any other teleporters leading to that location as their destination. One way to obtain it is by using the no-clip cheat. However, some speedrunners including Daerik and 4shockblast ([1]) have discovered setups for SR50 linedef skip manoeuvres with which they can reliably reach the BFG.

* The vertex count without the effect of node building is 1878.