MAP31: In The Void is a secret level in Doom 64, designed by Tim Heydelaar. The level itself is set inside a massive demon infested void. The level itself is traveling across large bridges and void tunnels while fighting many pain elementals, spectres, barons & Hell knights, the level also contains the third and final blue demon key. It uses the music track "Blood Red Shadows", also heard in level 17, Watch Your Step. This level is accessible from MAP18: Spawned Fear. 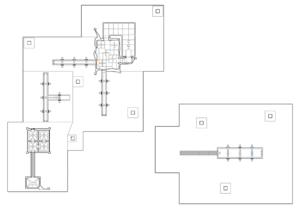 Map of In The Void
Letters in italics refer to marked spots on the map. Sector and Thing numbers in boldface are secrets which count toward the end-of-level tally.

Player begins in an open "killing ground" laden with monster guts and carcasses, and where several gallow-like structures of varying height are placed and adorned with used, bloody instruments of torture and slaughter. Immediately a few spectres charge at the player along with a Hell knight launching fireballs from a niche in a far wall. After dispatching all initial monsters, including a couple of mancubi near the location of the yellow skull key, the player will then have to cross a series of bridges suspended over the eerie, gloomy, foggy void. The bridges are infested with spectres and barons of Hell from afar launching fireballs at you, along with pain elementals lurking about. The bridges are interconnected via a network of teleporters which the player will have to make extensive use of to traverse the map.

The player eventually comes to a building that has four rooms laden with lost souls, Hell knights, and a baron, and once all those monsters are dispatched, the player can collect the red skull key and head for the red door, dispatching all new monsters that appear on the bridges along the way. Upon opening the red door and after dispatching the baron that blocks your path, the bridge takes you to a teleporter which brings you to a very remote section of the map. Several barons and a couple of mancubi will appear and attack you (it's best to get them to fight and kill each other before picking the rest off in this instance). After all monsters are dispatched, the player can collect the blue skull key at the far end.

The player then has to go all the way back to the building where he got the red skull key, but this time it's to head through the open wooden plank tunnel that leads to another room where the blue Demon Key rests. There will be a few lost souls to dispatch, and since the player has the blue skull key at this point, he can activate the switch to the left with the two blue pylons. This finally gives the player access to the yellow skull key located near the "killing ground" by activating the stairs where the first Hell knight was encountered.

The yellow skull key allows the player to unlock the open ended bridge that branches off the main bridge network and dive into the void to end the map.

To obtain the blue Demon Key, the player has to play through the map as normal; however, after unlocking the open ended bridge to the map exit, while crossing the bridge, the map will shake very briefly. This is an indication that a switch has appeared in front of the block in which the blue Demon Key rests and the player will have to head back to that area to activate it. Upon doing so, the Demon Key will vanish, and it reappears at the end of the wooden plank tunnel located in the remote portion of the map using the spot where the blue skull key was found, which has slightly risen out of the ground and now acts as a step for the player to enter the wooden plank tunnel and collect the blue Demon Key before it disappears and returns back to its original resting place.

Upon collecting the Key, a hoard of pain elementals and barons will appear, which the player will have to fight through as he makes his way towards the exit. To obtain 100% everything will require the player to dispatch all monsters, which will be challenging at this point in the map. Use of the Unmaker is recommended provided there is ammunition available for it. If not, the chaingun will at least keep the lost souls off the player.

* The vertex count without the effect of node building is 1592.