MAP31: Killer Colours is the secret map of Alien Vendetta. It was designed by Yashar "GeminI" Garibzadeh and Kristian "Ebola" Käll. It uses the music track "Future Military Conquests" from Duke Nukem 3D. It was one of the few maps to remain unchanged from the first version to the next. The par time defined in the executable is 6:30. 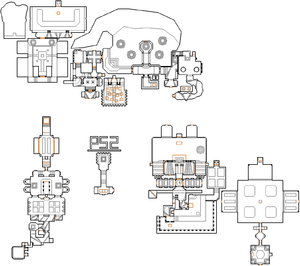 Map of Killer Colours
Letters in italics refer to marked spots on the map. Sector, thing, and linedef numbers in boldface are secrets which count toward the end-of-level tally.

Right from the beginning you are in the blue-colored areas. There are spectres and cacodemons abounding in these areas. Head out and to the right till you find a switch. This opens the blue bars before. Go through these to the next area where the next switch you press reveals several cacodemons. One of the closets has a switch to open up the next area, so go press it. In the next area, climb the stairs and make a running jump to the ledge with the blue skull key. Nab it, watching out for the cacodemons who attack you, and take the blue door at the top of the stairs. Head down the stairs in the next area and the floor should rise. The switch ahead lowers the ledge you are on to three cacodemons and a teleporter to the green area.

In the green area, the spectres are still around, but now Hell knights replace cacodemons as the more predominant monster. Go through and find the switch, revealing a wall behind you with Hell knights. The wall between the skull markings is a door to the next switch, press this and backtrack to the first switch to find an open passage to go through. If you go left here, you can get a box of shells, and open a door at the top which leads to a number of supplies. Otherwise, go straight, using the next wall, killing the Hell knights, and pressing the switch to open the east passage. Go through the next wall and then head north to a room with Hell knights and a switch. This switch opens the next wall to the east, so go through here. Follow this passage, down to the liquid green floor, and through the green cavern. Head all the way until you reach the evil eye, and head right up to it. You will probably hear teleporting sounds. Now backtrack and you will find Hell knights on the grounds that you previously were. Use the teleporter to go back and on the way, a new room is open with another Hell knight and a switch. Hit this switch, and head back through the previous hall to find the south door open. Yet another Hell knight is through here, and a teleporter to the next area. Kill the Hell knights in front of you and climb up the stairs going north to the next room. At the end of this cave is a switch which lowers the north wall revealing several monsters, including an arachnotron. There is a teleporter here and a lowering wall just behind it. Do not enter the teleporter or you will be instantly killed. Instead, wait for the wall to lower all the way, fending off monsters as you wait, and another teleporter will be revealed. Through this teleporter, press on the wall to rise up to the next room, where spectres will teleport all around you. Subdue them and head north to the next teleporter.

This teleporter takes you to the red area. A lot of strong monsters exist here, including demons, revenants, and barons of Hell. In fact, a demon will bite you right from behind as soon as you teleport into the area. Find the switch here. This opens a window in front of you where a cyberdemon will probably teleport away. More importantly though, a wall to your north will open. Here there are four openable walls. Take either side one with revenants and a switch at the end of each. Then, take the northern one to proceed. The pickups you see will be closed off, but you can still get them by heading to the sides here and pressing the sides to acquire them. There is a switch on the left side here to open the next area to the north. A cyberdemon will be to your immediate left, so dispose of him as well as the baron, then press the switch here to lower the platform the baron was on. Although it looks like two teleporters, this actually opens two nearby closets filled with revenants, with switches at the end of each. Press the one on the right first, then the left, to reveal a teleporter back to the beginning of the red area. The place where the demon attacked you from behind now has a passage for you to go through. Follow the passage until you reach the cyberdemon who teleported out earlier. Kill him, then use the red bars to the north. They will take a while to lower, but when they do, enter the portal.

Now if you want to go the secret exit, follow the instructions for Secret #3. Otherwise, use the lift north and go to the block here for it to lower, with barons of Hell on both of your sides. Make sure to kill them, then head north. In this arena, press the switch on the pedestal to lower it as well as the walls around you revealing a large army of monsters in each one. Make sure to grab the invulnerability as it will help you immensely here, and grab the megaspheres should your invulnerability run out. Now press the two switches to remove the bars and take the normal exit.

* The vertex count without the effect of node building is 3822.